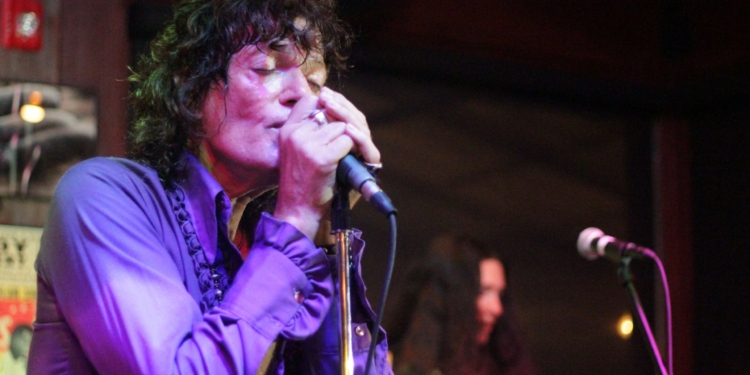 TROY — If you were in the mood to rock out to Classic Rock and British invasion tunes from The Beatles, Rolling Stones, and Led Zeppelin, the Dinosaur Bar-B-Que in Troy was the place to be this past Friday, Sept. 22 as Blue Machine made their return back to the venue.

This was the first public appearance for the band since last December. The band’s return not only brought in a packed house for the venue, the performance was also entertaining, fun and a great night for their fans as they rock and rolled in the City of Troy.

Blue Machine, featuring Kenny Hohman (guitar/vocals), Joe Daley (drums), and Lori Friday (bass/vocals) and front man Tommy Love (vocals/harmonica), have been bringing their own take on many popular classic rock and British Invasion tunes for over 10 years throughout the Capital District and New England. For over 21 years, Hohman, Daley and Friday perform as an international and local power trio called “Super 400.” Love who at times can sing and sound like various performers such as Robert Plant, Mick Jagger and Jim Morrison, is also a lead vocalist in another local group, “Blue Hand Luke.”

“We’re going to give you some trippy music,” Love called out to the fans after the band had finished performing “Happy.” Love was making a reference to their next song, “Riders of the Storm” (The Doors) that Hohman begun to play the memorable chords of the tune on the guitar. The Doors’ other hit, “Roadhouse Blues,” followed suit.  From The Doors came The Allman Brothers Band. The band dedicated “One Way Out” and “Whipping Post” to the late Gregg Allman.

Watching the band sing and jam out to these two tunes from the Allman Brothers was captivating, magical and entertaining. As Love sang his verses to these songs, the instrumental jam session had begun in full force. One moment, Hohman would play a soaring guitar solo,  Daley would begin soloing on the drums, then Friday would begin her solo routine to Daley’s toned down drum taps for a given moment. As her solo ended, Hohman and Love reunited with the group to continue to perform their song(s) until it ended. The band, being as connected and passionate to these songs as they are, helped make these classic songs come to life.

Like Blue Machine on Facebook to stay updated on where the band will perform next. Also, check out Dinosaur BBQ’s website to stay informed on the local acts that will be performing in the area at http://www.dinosaurbarbque.com/location/troy-ny/live-music/ .

“Come Together” (The Beatles)

“Heart Full Of Soul” (The Yardbirds)

“Tell Her No” (The Zombies)

“All My Loving” (The Beatles)

“Can’t You Hear Me Knocking” (The Rolling Stones)

“Riders of the Storm” (The Doors)

“One Way Out” (The Allman Brothers)

“What Is And What Should Never Be” (Led Zeppelin)