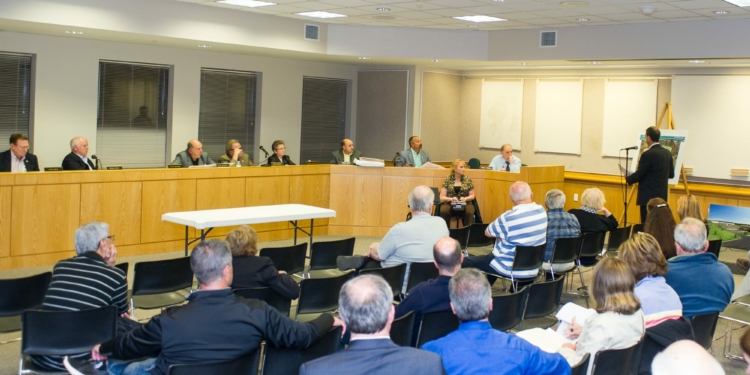 COLONIE – The Summit at Forts Ferry is back on the drawing board – albeit with some major changes.

There was some question about how the buffer was reduced from 213 to 100 feet, but that is now resolved and it will follow the standard buffer zone as is applied to the rest of the town.

In April, Nigro, who owns similar “Summits” in North Greenbush and Saratoga, pulled the initial plan to build 110-units of senior housing on 13-plus wooded acres off Forts Ferry Road. That plan would have required a change in the current zoning to a Planned Development District, which would have allowed more people but would have allowed him to develop the land in an economically feasible manner without any buildings dedicated to commercial activity.

Neighbors from Omega Terrace, Catalina Drive and Harrowgate Way came out in force against the project, claiming the buffer wasn’t large enough and the buildings were too large for the site. So, Nigro went back to the drawing board.

He and his team presented a sketch plan of the new roject to the Planning Board on Tuesday, Oct. 3. And the board, along Joe Grasso, the town’s designated engineer for the project, was not without a slew of questions about traffic, setbacks, buffers and parking.

Basically, while the plot of land – owned by Timothy Kellerher and Phyllis Mooney – lays between commercial development like the Target plaza and the medical arts building on Wade Road Extension it is surrounded by residential properties and it’s mostly residential going down Forts Ferry Road.

“The plan generally meets the Colonie design standards, but in terms of the scale and the location, the character of Forts Ferry Road changes as you get past Wade Road,” Grasso said.  “The land use we are looking at here could be perceived as inconsistent with the land uses currently out there.”

Wendy Holsberger, a member of Nigro’s team, said a traffic study projected an increase of 85 additional trips during the morning rush hours and 87 during the afternoon. All but 12 and 17, respectively, would be generated from the office building and not the senior housing.

That increase, while it sounds large, would cause at most a 15-second delay at intersections surrounding the property, according to Holsberger. She added the state Department of Transportation threshold to determine whether or not an intersection needs mitigation is an additional 100 trips at either peak hour.

Grasso, though, said the buildings would increase traffic on Forts Ferry Road by 18 percent during the morning rush hour and 13 percent in the afternoon.

“Because it’s less than 100 trips doesn’t mean it doesn’t warrant a more in depth look at traffic impact,” he said. “Even though it may not cause a significant delay at intersections, or cause safety hazards, that level of increase could be perceived as significant so we may want to get a better understanding of the increase in traffic and how it will change the character of Forts Ferry Road.”

Planning Board member Kathleen Dalton said any traffic considerations should include Forts Ferry Elementary School and the State Police barracks and the New York State United Teachers building on Route 7.

Hoslberger said the vast majority of traffic studies focus on morning and evening peak hours, and the projections here do cover all intersections leading to the project, including at Wade Road and Route 7, which is notoriously congested at rush hour, particularly in the evening.

Other concerns voiced by the board is the 20-foot setback from Fort’s Ferry to the office building. It is exactly what the town’s zoning calls for, said Michael Tucker, a member of Nigro’s team, but members encouraged Nigro to move the building off the road a little.

They also suggested shifting the location of the garages from the south side of the apartment building to the north side to work as an added buffer between the project and the residential neighborhoods.

“This is a sketch plan review and it is to get feedback and hopefully some positive criticism,” said board Chair Peter Soto. “We hope you look at the scale and a shifting of the building and taking a more in depth look at traffic. We look forward to seeing you come back again after that homework is done.”

Mary Beth Sleven, Nigro’s attorney, said they would take all the comments under consideration to “make sure it is the best project it can be.”

Director of Planning and Economic Development Joe LaCivita said it is up to Nigro when he opts to address the concerns and come back before the board.

He said Wednesday construction could start as early as next spring.