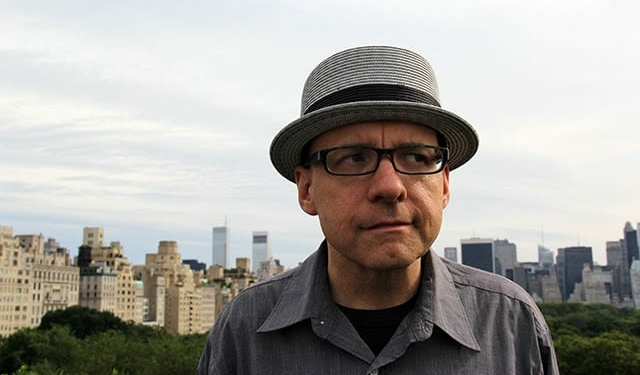 HUDSON — A guy walks into a bar and recites poetry. People applaud. He gets musician friends to play behind him. He becomes a poet-rocker. On the strength of a single called “Jesus Was Way Cool,” the band’s indie-label debut album hits #1 on the CMJ charts. The band gets signed to a major label. The guy makes a video of a song called “Detachable Penis” that actually gets MTV airplay. The major-label thing does not work out. Instead, he goes to law school and becomes an attorney specializing in intellectual property law, which means he protects people like himself from getting ripped off by major labels and other venal music industry types. All the while, he continues writing poetry meant to be spoken and making music. His cult band from the early 1990s reunites, disbands, and reunites. He forms other bands. He becomes a living legend.

The guy is John S. Hall, his original band was King Missile, his

current band is Unusual Squirrel, and he brings it to Club Helsinki Hudson on Sunday, Sept. 10, at 7 p.m., as part of the monthly Rogovoy Salon curated by my pal, music journalist Seth Rogovoy.

“They don’t make very many like John S. Hall anymore,” said Seth Rogovoy, explaining why he chose Hall to perform in the Rogovoy Salon series. “With King Missile, Hall took his witty, culturally trenchant spoken-word observations and gave them the punk-rock setting they naturally cried out for.”

A profile of Hall in Vice Magazine called “King Missile’s John S. Hall Is a Sensitive Artist (Who Works at a Law Firm)” is funny not only because Hall is a funny guy with a funny story, but also because it is written in the kind of deadpan style that Hall favors in his own writing. The New Yorker called him “an absurdist rocker turned corporate analyst: Hall seems to have traced the fitful arcs of his verses” in a glowing profile last year.

Who else would name an album “The Psychopathology of Everyday Life”?

“John’s new band, Unusual Squirrel, builds on the tradition of giving his work titles that most mainstream print media still won’t print,” Rogovoy said, including the opening and closing track of the band’s new album, “F–k Sandwich,” which is itself proudly media-proof (while referring to the tracks that bookend the album). Mostly, John is an amazing storyteller,” said Rogovoy. “His narratives range from naughty to surreal to funny to morbid, but they always feature elements of surprise and perceptiveness. He’s a cultural critic in verse. His new album even has a song explaining the inner workings of the financial crash of 2008. I like to think of John as a rock ‘n’ roll Walter Benjamin crossed with Andy Kaufman. Maybe he’ll take us all out for ice cream at the end of his show.”

PICK of the WEEK: Madison to host second film fest