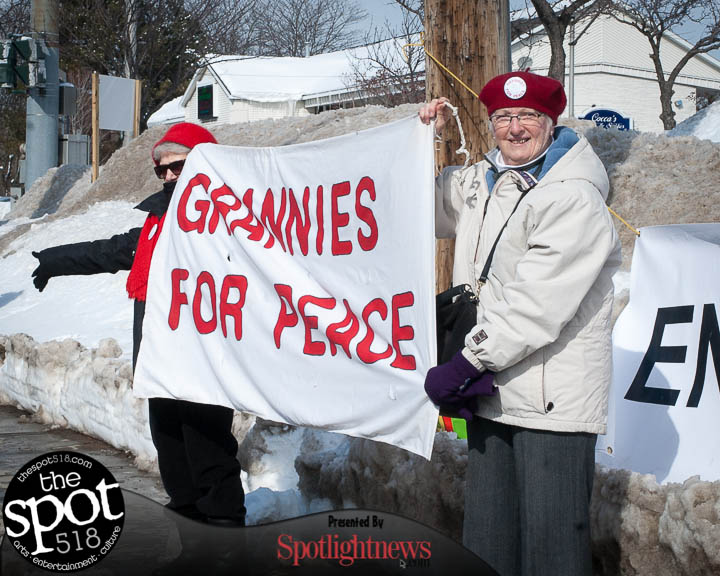 COLONIE – Valentine’s Day is a day for lovers to express their feelings and exchange flowers and chocolates and other gives of endearment.

But, since 2006, a group of grandmothers and their supporters, Grannies for Peace, have gathered at the busy intersection of Wolf Road and Central Avenue to tell the world more love is needed across the globe.

“We are celebrating valentine’s Day, a day of love, and we are spreading love not hate,” said Mabel Leon, of Schenectady. “And are standing with a strong statement that we support Muslim refugees, we support immigrants and we support black lives matter. There has been spreading anti-Semitism and we stand for religious freedom for Christians, for Jews, for Hindus and for Muslims.”

Some 20 grannies waved at drivers honking their support and smiled at those who rolled down their windows to holler words of derision.

“We’ve been doing a Valentine’s Day vigil since 2006,” said Mickie Lynn of Delmar. “But, it’s even more crucial right now because of the immigration situation and the fact so many people are being made fearful and being deported and it’s just a big mess. It’s definitely not love, it’s hate.”

You don’t have to be a grandmother to join the protest.

“It’s a day of love and we have to show love and that’s what we are doing,” said Albany resident Dan Wilcox, a member of the Veterans for Peace who was drafted during the Vietnam War. “Someone once said to me ‘Shouldn’t all veterans be for peace.’ Unfortunately, it doesn’t always work out that way. Who better to know what a horrible thing war is than a veteran?”

The message at today’s vigil – in addition to spreading love not hate – was to “embrace refugees.”