PICK of the WEEK: Off The Record holiday show at the University Club on Friday, Dec. 2 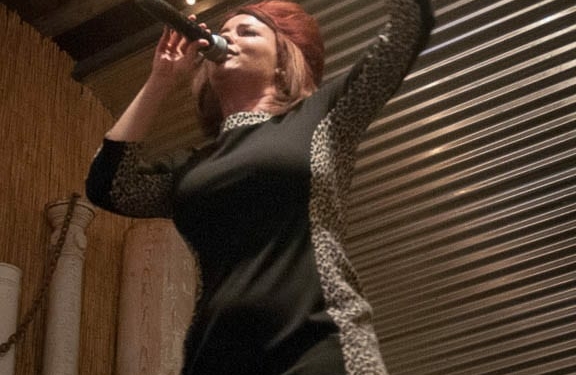 The Fleshtones @ The Hangar in Troy, Saturday, Oct. 15.

Ask Joanna Palladino and she would disagree.

“I have to say redheads,” she said with a laugh. “I’m a redhead on stage, and a blond in real life.”

On stage Palladino fronts Albany’s three-piece cover band, Off The Record. The trio boasts of being the Capital District’s lone lounge band, covering ‘60s rock with a go-go flare. Guitarist Bill Harrison and drummer Bob Resnick come across as two, clean-cut, all American gents on stage. Their white shirts and black ties are contrasted by Palladino’s crimson bee hive, leopard skinned long coat and heels. The coat usually comes off after the first song, often revealing a sleeveless dress and long, white gloves.

To say the three have fun would understate the attention they demand while on stage. At a recent show opening for The Fleshtones at The Hangar, Palladino jumps and jives, stomping on stage, whipping up the crowd. With songs that predate most of those in attendance.

“When we got together five or six years ago, we just started picking out songs that we liked,” said Palladino, explaining how the band became to be. “And, what we discovered was that the majority of them were ‘60s songs, and we didn’t even realize it. So, from that point on we made a conscious decision to [cover] mostly ‘60s, and some then we would take newer songs with a retro-vintage feel. That ‘60s, rock & roll lounge kind of sound.”

That sound conjures images of times gone-by, where men wore fedoras and drove gas guzzling Buicks. Where the Masters of the Universe met in exclusive downtown clubs, drinking scotch in smoke filled barrooms. If you think of AMC television’s “Mad Men,” you’re following along nicely.

Friday, Off The Record take its show to The University Club of Albany, perhaps no better pairing between venue and act. Founded in 1901 by prominent members of Albany society, the University Club is housed in a brick, Colonial Revival on the corner of Washington Avenue and Dove Street.  The assembly rooms adorned with chandeliers, crown molding and Greek archways at each threshold.

“And, my favorite is the women’s bathroom is carpeted and has Aqua Net [hairspray], usually,” said Palladino. “So, personally, I really love it because it is a little throwback. It’s not completely modern, in a modern sense. It’s a really neat space,” she said, adding that that club has managed to maintain the charms of its past despite the years.

As, too, Off The Record’s music.

Three from NYC arrested for passing fake $100 bills in Colonie

COMING SOON: Disney on Ice at the TU Center