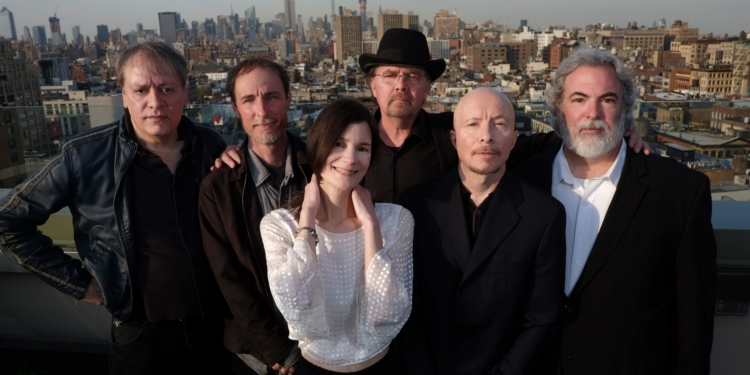 COHOES — Steven Gustafson is quick to laugh these days.

The bass player, and founding member of 10,000 Maniacs, believes he and his bandmates are playing the best music they have had in 35 years. The alternative rock band released two albums in 2016, and is off touring in support of “Playing Favorites,” its first live album since the 1993 release of its commercially successful MTV Unplugged LP.

The success of 20 years ago continues to define the perception casual fans have of the band. But, it’s also the specter of a former singer that has haunted the band for more than half of its existence.

When Gustafson sits down to speak with TheSpot518, he is less than two weeks away from performing at Cohoes Music Hall, where 10,000 Maniacs are to play Saturday, Nov. 19.

It is also a day removed from Election Day. Religion, politics and money are often topics to avoid in everyday conversation. Leading to this interview, another topic is assumed to be anything relating to Natalie Merchant, who left the band in 1993. Yet, I immediately admit to Gustafson that I had  “Like the Weather” playing on a continuous loop in my head while preparing for our interview.

“I guess we kind of get used to it,” Gustafson said, when I share that the song is part of my life’s soundtrack. “It’s very flattering. It’s sometimes unnerving. Musicians write songs for a reason, you know. They want people to listen. They want people to whistle when they walk down the street. And, they want people to buy them. We don’t want to be paupers. It’s a business. When we can capture someone’s attention with a melody or lyric, well then we did something right.

“I produce shows, some of it is just a matter of repetition,” he continues. “If you hear something long enough, you’re not going to forget it. It’s kinda like how political campaigns are run.”

“Playing Favorites” features 14 tracks from the band’s full catalogue of songs. It spans from 1983’s independent “Secrets of the I Ching” to 1987’s “In My Tribe” to 1993’s triple platinum MTV Unplugged (which featured the Billboard No. 11 single “Because the Night”) and beyond. “Like the Weather” is the No. 2 track on the album, the knowledge of that fact makes the confession less awkward.

“Our only real live record that we made was the MTV thing,” said Gustafson. “That was sort of an acoustic thing, and done mostly by our lead singer [Merchant]. And, I think what we wanted to do was capture how we are playing currently, and where the band’s at. We think we’re playing better than we ever had. We’re quite excited about that because we’re playing a lot now. And, we just wanted to document that.”

Formed in 1981 in Jamestown, 10,000 Maniacs struggled until its first full-length album release was spun on BBC Radio 1 by legendary DJ John Peel, giving the band its first minor U.K. hit, “My Mother the War” and enabling it to tour overseas behind it. Its major label debut, “The Wishing Chair,” was released to much critical acclaim. However, it was “In My Tribe” that went double-platinum in the U.S. and yielded the first of a string of radio hits with “Like the Weather.” Subsequent releases “Blind Man’s Zoo,” “Our Time in Eden,” “MTV Unplugged” and “Love Among the Ruins” sent more songs up the charts, most notably “These Are Days” and the Bruce Springsteen/Patti Smith-penned “Because the Night.”

The mid-’90s through much of the next decade was marked by line-up changes and breaks for other projects, but the core members remained intact. The six-piece core of Gustafson, Jerome Augustyniak, Dennis Drew, Jeff Erickson, John Lombardo, and Mary Ramsey have been together for the better part of two decades. Erickson, the band’s guitarist, is the newest member by having joined in 2002.

It’s Ramsey depicted on the “Playing Favorites” album cover with viola in hand. You can catch a similar image of her in that famed MTV broadcast, too. Outside of a brief hiatus in the early 2000s, Ramsey has been the Maniacs lead vocalist since Merchant’s departure in 1993.

Merchant left the band in August 1993, announcing the news on MTV a few months prior to the release of the “Unplugged” album that would go triple platinum. She said she, “didn’t want art by committee anymore.” A quote Gustafson repeated.

“There’s a long story about that MTV Unplugged thing,” he said. “We never, ever, put our pictures on the cover of any of our albums until that one. And, of course, none of us got on the cover of that one.” Except for Merchant. “It was a springboard off our shoulders. I suppose we take great pride in that, because what else are we going to do? Complain? No. We helped her get to where she is today.

Since leaving the band, Merchant has released seven solo albums. Her 1995 debut “Tigerlily” would go on to sell more than five million copies off the strength of hits “Carnival,” “Wonder,” and “Jealousy.”

Both 10,000 Maniacs and Merchant perform songs from their shared past at their respective shows. But, conversations are often limited to lawyers. In nearly 25 years, Gustafson said he’s seen Merchant only twice, once by mistake. When Merchant’s father died a few years ago, Gustafson and the band were out of town on tour. They sent flowers, and he said Merchant stopped at his house to drop off memorabilia her father collected, along with a thank you note. “I’m sure we would have sat on the porch and we would have chatted,” he said.

“I have to be honest,” he said. We weren’t the easiest guys to be in a band with,” Gustafson said, describing a rift of personalities between the band and its lead singer. “We were a bit arrogant. A bit intoxicated. … We were in the front of the bus watching football games, and she was in the back of the bus learning German.”

One thing clear about the band today is that everyone is having fun, said Gustafson.