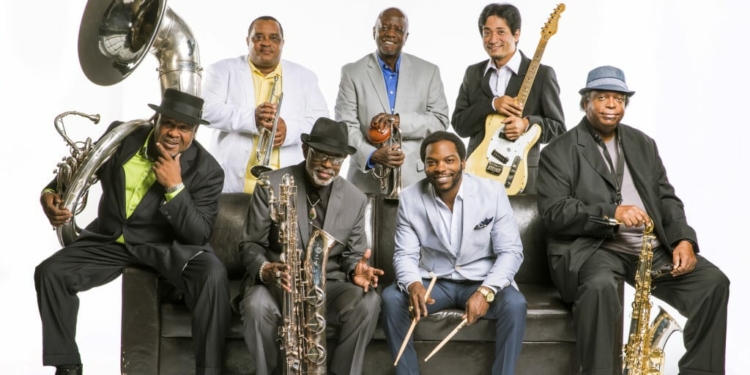 TROY — The two-day Bridge Jazz Festival will feature the Dirty Dozen Brass Band and Eldar Djangriov on Friday, Feb. 24 and The Chronicles, Cyrille Aimee and Maceo Parker on Saturday, Feb. 25.

The shows will kick off at the Troy Savings Bank Music Hall at 7:30 p.m. on Friday, and 7 p.m. on Saturday at the Massry Center for the Arts at the College of Saint Rose.

The seven-member Dirty Dozen Brass Band got its start in 1977 at the Dirty Dozen Social and Pleasure Club in New Orleans. Social and pleasure clubs date back more than a century, and were a way for black southerners who didn’t have money for a funeral to celebrate the death of a loved one.

Brass bands, the early predecessors of jazz as we know it today, would follow the funeral procession from the clubs to the cemetery playing music. Then, when the family was out of earshot, it would burst into dance tunes for the onlookers in the street.

The Dirty Dozen Brass Band revitalized the tradition and has brought its mix of genre-bending romps and high-octane performances across the U.S. and more than 30 other countries on five continents.

The band has played with David Bowie, Elvis Costello, the Dave Mathews Band and the Black Crowes.

Grammy-nominated pianist Eldar Djangriov is a “blend of musical intelligence, organizational savvy, enthusiasm and prowess that was all the more impressive for seeming so casual … an ebullient impressionist,” according to the New York Times. “Maybe he made a pact with Lucifer to be the greatest pianist ever.”

Djangriov, who hails from Kansas City, has performed with Michael Brecker, Marian McPartland, Dave Brubeck, Wynton Marsalis among many other jazz greats.

On Saturday the six-piece, high-energy band The Chronicles will bring its mix of jazz, funk, soul and hip-hop to the Massry Center.

Also on Saturday, Cyrille Aimee will bring her love of gypsy music to the stage.

The world-renowned vocalist was raised in France by a French father and Dominican mother and would sneak out of her bedroom window to nearby gypsy encampments. Years later, she would sing on street corners with friends while traveling across Europe.

On one such trip, she found herself at the Montreux Jazz Festival, where she won first prize in a vocal competition, which included the financing of her first album.

Music Hall members can purchase tickets now by phone or in person at the Box Office. Single tickets sales began on Monday, Oct. 24.