REVIEW: A Night With Janis Joplin 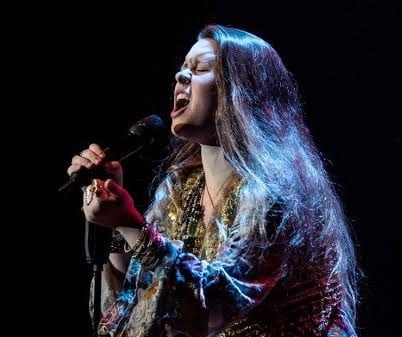 Joe Cocker growls “You feelin’ alright/ Not feelin’ too good myself” from the speakers in Capital Repertory’s intimate studio theater.  A cute brunette nearby says aloud to no one in particular “They should have started with a dance party.”  Thursday’s “Alive at Five” crowd seems to have filled the house, and lively party chatter plays back-up to Cocker’s “You sure took me for one big ride/ And even now I sit and I wonder why.”  The set by Brian Prather seems to have been lifted whole from a Tinker Street bar in Woodstock right down to the eclectic mix of electric candles downstage acting as footlights, several mandala pattern carpets in different colors scattered on the stage floor, a slightly raised 3 by 4 foot platform down center, the only dive-bar anomaly two story stacks of aluminum struts packed with rotating led lights upstage left and right.  The 8-piece band —1969 perfectly long-haired and bearded, fringe vested and denim bell-bottom wearing missing only the artisanal hand-rolled clove or other herbal cigarettes tucked behind an ear — waits upstage, guitars, drum, bass, trumpet, trombone, sax, and keyboard (doubling as the front of the wooden bar itself) at the ready.  “It’s A HAPPENING!” the cute brunette nearby screams as a blond in the front row stands to dance to Cocker singing “You feelin’ alright/Don’t you get too lost in all I say.”

And “A Night with Janis Joplin” hadn’t even started yet.

Two and a half hours later, with a karaoke thumping sing-a-long to “Mercedes Benz” (the last song Joplin recorded, a pure and direct a cappella), the Thursday “Alive at Five” crowd not only had a good-time tribute show to Janis Joplin, but found out CapRep is “alive” 6 days a week, twice a day on Wednesdays and Saturdays.  A splendid time is guaranteed for all who love to groove to music and be moved by its soul.

And while you may show up to spend the night with the Janis Joplin jukebox promise of the title, your ears and soul will leap to your feet at the performances of Danyel Fulton, Jannie Jones, Nikita Jones, and Kimberly Ann Steele singing the songs of the women whose souls influenced Joplin’s. Their performances and the weaving of Joplin’s story with the African-American artists who are the foundation of Joplin’s music are what make A Night With Janis Joplin a show not to miss.

The 25 songs in the show run atop Joplin’s (Kelly McIntyre, who leaves all of her onstage by the end of the night) influences, and fans will stand, dance, and sing along with Joplin’s hits; “Piece of My Heart” in particular grabbed part of mine and didn’t give it back.  “Try (Just a Little Bit Harder)” and the poignant “Stay with Me,” done with a backdrop of projected Joplin family photos got people moving and grooving, while the Kris Kristofferson hit “Me and Bobby McGee” was curiously anti-climatic.  Performed immediately after the stirring “I Shall Be Released” (performed by Fulton, the Joneses, and Steele as “Blues Singer,” Nina Simone, Bessie Smith, and Etta James respectively, i.e., the Soul behind Joplin’s soul), which ended with the audience leaping to its collective feet to applaud, “Me and Bobby McGee” kept us on our feet without remembering why we were standing.

That moment underscores the one weakness of “A Night with Janis Joplin”: the strength of the play is the singing of Joplin’s influences, and the staging of Etta James or Odetta or Bessie Smith singing was simply done, lighted without distraction, done with little accompaniment.  When Janis sang the same song in her style, the lights flashed and moved and changed colors and the 8-piece band wailed like there were 25 instruments all about to be re-possessed.  While Janis Joplin frequent addresses to the audience were how she would “tell like it is” or “don’t b*llsh!t anyone else and don’t b*llsh!t myself,” the staging pointed out that b*llsh!t is always lit with a lot of moving, changing lights.  “When A Night with Janis Joplin” stays true to its roots, it is a happening.  When the lights ballyhoo and Janis becomes a contestant on “The Voice” belting every note, the four women singers fade into the background and the second act jukebox tendency of the piece hits big downbeats.  It’s a fun show, fans of pop Janis Joplin will love it, but a little bit of her heart is torn away by it.  It’s a shame, because the woman could sing without all the b*llsh!t, as “A Night With Janis Joplin’s” first act makes clear.