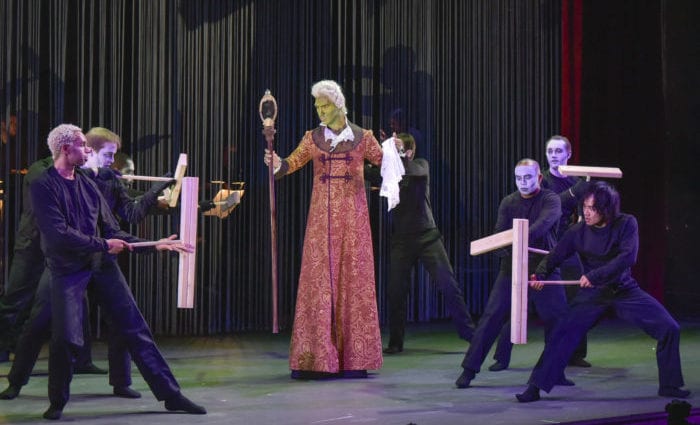 Jarrett Porter, as The Narcissistic Ogre, is surrounded by his image in Opera Saratoga’s “The Witches of Venice.” Gary David Gold

SARATOGA SPRINGS — Opening Night (July 2) was packed.  The parking lot nearest Spa Little Theater is normally half filled for non-opera performances; for the American Premiere of “The Witches of Venice” with music by Philip Glass, all the parking lots were filled, and cars were parked on the grass.  Fluorescent orange vested parking lot monitors stopped my car at each intersection brusquely demanding $10 for parking. “But I’m here for the opera” was greeted with either a quizzical look with a subsequent wave forward accompanied by a warning into the walkie-talkie to orange-vest men further on that “one for the opera coming through,” or an operatic “you’re here for the op-er-RAH?!  Hoo-RAH!” and a deep bow and a sotto voce report into a walkie-talkie “one for the opera coming through.”  “I didn’t know the opera was so popular” I said finally to the orange-vested hardhat outside of the Spa Little Theater lawn: “Phish. People are here for Phish,” he said with a laugh, “but the Witches are a close second today.”

The Glass opera and the Phish concert made for perfect antithesis, the sort of pairing William Blake might have imagined in his more sedate moments.  For those wishing that their “op-er-RAH!” was bloated bellowing of well-known stage pictures suitable for 1 percenters to snore through until it was time to show off their formal wear during intermission, “The Witches of Venice” isn’t that.  This 1995 fantasia was part “Nutcracker,” part “Peter and the Wolf,” a little “Frozen,” garnished with enough “Game of Thrones” images and dialogue to keep non-operatic people engaged. Those smoking hand-rolled artisanal cigarettes while rolling up flannel sleeves might have believed they could hear Trey Anastasio’s riffs in Philip Glass’s New Opera notes inside the building they floated by.  In short, Phish Heads missed a hell of a show in the Spa Little Theater, and folks have one more chance to take in the sublime and subtly silly “Witches.”

Initially the bare thrust stage, a two-story silver backdrop slit into slivers that kept the six-piece band visible upstage, seemed the perfect metaphor for Opera Saratoga’s production: a large children’s ensemble would occasional move across the thrust stage as anxious parents and neighbors in the audience leaned forward, seemingly thinking too “why do they insist on putting the least enthusiastic child smack upstage center in children’s chorus numbers?”

But when the black and white clad “The Maid” (Emily Spencer) sang in Italian (in contrast to her Puritan attire), “Life can be difficult/But what can you do?/ A drop of good red wine…gets my heart to sing” (“Supertitles” in English by Lawrence Edelson, operated by Joshua Horsch), the Game of Thrones echoes tittered through the opera, and somewhere Tyrion Lannister nodded his head, drank his wine, and sang along.  “The Wind” with Targaryen hair (Kira Petersen) floated across the stage saving “Bambino-Plant Boy” (Oliver Nathanielsz), heir to the throne, then did a pas de deux the epitome of grace with “A Magical Pigeon” (Yusaku Komori), which to me seemed an homage to the 3-Eyed Raven, and the Children of the Forest (here a large ensemble of sweet-singing children in floral and tree costumes who aid the Plant Boy blossom) accepted “The Plant Boy” (definitely Bran).

More Witches with Targaryen hair sweep onto the stage, bringing Skeletons (a not as large ensemble of boys dressed like The Night’s Watch) out from the audience to conjure for “The Ogre” (Jarrett Porter), a cross of The Mountain and King Joffrey with a dash of White Walker.  The electric keyboards sound like electric guitars as the pounding rhythms of Glass’s score bring “The Ogre” and “The Plant Boy” together, the former wanting to eat the latter seemingly with a nice chianti.  There’s even a little twerking thrown into the choreography before gondolas ferry all across the Riverlands to King’s Landing, where “The Wind” with Targaryen hair danced another pas de deux of singular sinuosity with “The Magic Pigeon.”

For 75 minutes, “The Witches of Venice” entrances, and exiting the Spa Little Theater, I thought of how art expands your mind, finding connections impoosible without art, and that, if I read the opera’s ending right, Jon Snow will marry Alysane Mormont and Summer is definitely here.  Come on into the opera: “The Witches of Venice” is just the right introduction.

Editorial: Read beyond the hashtags