Vodka with a death wish: Highly anticipated spirit in pre-release

by Michael Hallisey
in Food and Drink, The Spot
Reading Time: 3 mins read 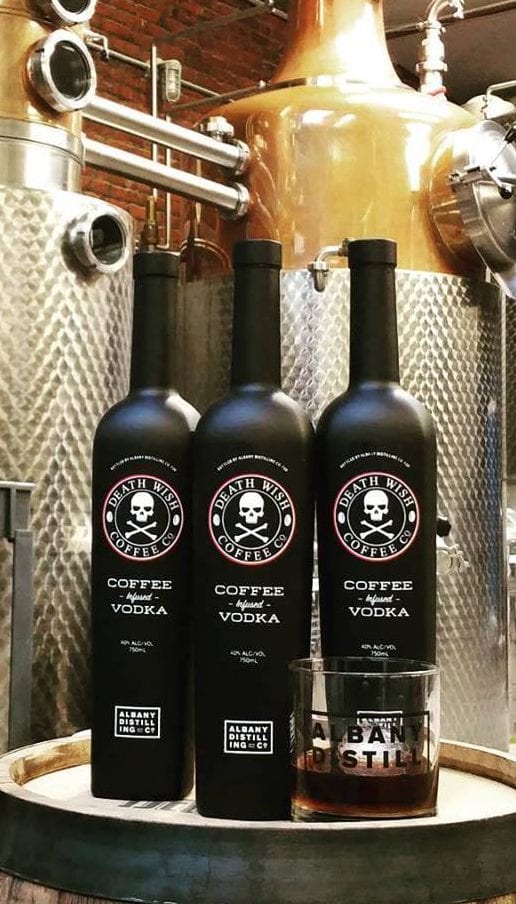 Coffee infused vodka. It’s a thing, and it’s going to hit the general market later this year. But, you may get your hands on a bottle this week during pre-release. Death Wish Coffee Co.

ALBANY — A local coffee company with a penchant for headlines has teamed up with one of the Capital City’s distilleries to create a spirit with a death wish.

This month Death Wish Coffee and Albany Distilling is offering a pre-release of a specialty vodka product infused with the popular local coffee.

Death Wish Coffee had developed a healthy following among coffee lovers in the Capital District before receiving national attention by winning a television commercial spot last Super Bowl Sunday. Its popularity has since grown in recent months. Based on a behind-the-scenes video that covered the moments following the commercial, Internet sales for the coffee jumped exponentially.

This month, the ubiquitous skull and crossbones of the coffee brand makes its way onto an ominous looking black bottle of vodka produced through the Albany Distilling Company. The union between the two companies is an example of a couple of trends growing throughout the region.

First, there is a growing economy of local producers. Both Death Wish and Albany Distilling Company are relative start-ups, both having launched within the past few years—Micro companies, sporting a small staff of employees that include Nine Pin Cider in Albany and Yankee Distillers in Saratoga County. Death Wish Coffee, started in 2011, boasts a staff of less than a dozen employees. Albany Distillery, founded in 2012, currently staffs four employees. That figure includes the spirit company’s two owners, said co-owner Richard Sicari.

Second, there is a collaborative spirit growing among companies, establishing themselves among a community to assist in each other’s growth.  It’s been observed in the art’s world between Proctors, the CapREP and Universal Preservation Hall in Saratoga. It’s been seen in Albany’s Craft Spirit Trail that opened last year, of which Albany Distillery is a part. Within the context of the trail, Sicari said the joint marketing effort among perceived competitors is not as odd as it may appear. The micro breweries are not competing with one another, as much as they are against the larger companies with national recognition.

“It’s crazy to think we’re going to compete against each other,” said Sicari. “We’re all looking national… We will do well if we all band together, use all of our knowledge and help each other out. Because, who we really are competing against are the big boys.”

Death Wish Coffee has that national recognition, and its working to keep its brand noticed nationwide. The specialty vodka is being introduced through selected retailers throughout the Capital District. The timing seems perfect for the spirit company, allowing Albany’s first distillery since Prohibition to breakthrough the national scene. But, Sicari said, the partnership between the two has been around for a few years. And, news of the new vodka has whispered across the area since late 2014.

Sicari said Death Wish Coffee had say from the taste of the spirit to the look of the bottle. He called the coffee company “masters” of marketing.

As of print, there have been two pre-release parties, having started at The City Beer Hall in Albany last Wednesday. Sicari said the response has been positive. Those who have sampled the vodka describe it as tasting “just like coffee.”

“The plans are to continue with [the vodka],” said Sicari, whose initial count stands at 17,000 bottles. That figure alone represents five-times the amount of bottles Albany Distilling produced last year. “We going to start local and I’d like to go state-wide in the next two or three months.” Beyond that, Sicari said, he has to see.