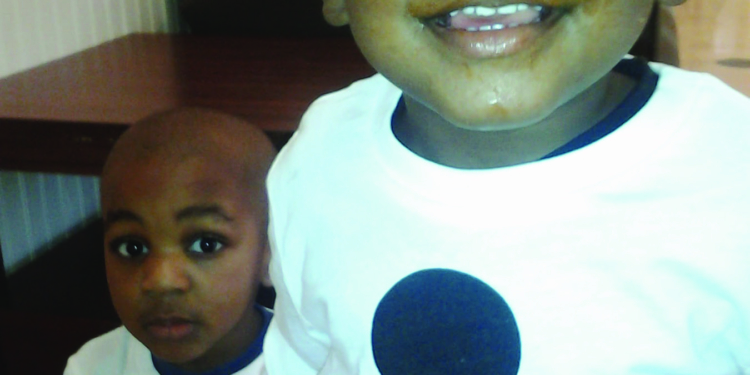 Brothers Kamari and Kameron have been diagnosed with Autism Spectrum Disorder, and despite the challenges that sometimes presents, their grandmother is a steady force in their lives, providing unconditional love and understanding.

Five-year-old Kamari cozied up to his grandmother, Karen Cooper, and asked her to tickle him. A few minutes later, his 6-year-old brother, Kameron, indicated with actions that he too wanted to be tickled. The adults could hardly hear themselves talk over the children’s giggles and chatter.

According to Ladasia Jeffers, this is how her boys react each time they spend time with their grandma.  Like many grandparents, Karen abides by the “whatever happens at Grandma’s, stays at Grandma’s” rule.

Their joy in being together is evident. Their grandparent-grandchild bond and communication is powerful. Karen understands each grandchild completely. Both children have a unique style of communicating.  Both are affectionate and intelligent. Both have autism.

It’s been said that it takes a village to raise a child. This is never more true than when the child has developmental disabilities. When a child is diagnosed with Autism Spectrum Disorder (ASD), the impact goes beyond the nuclear family. Grandparents, in particular, often share the initial shock and grief at the diagnosis, while they define their role in this new situation.

Children on the autism spectrum generally have difficulties in three areas: social interaction, communication and behavior challenges. At this time, approximately 1 in 68 (mostly male) children are diagnosed “on the spectrum.” Because autism is a spectrum disorder, there is a wide variety of characteristics. This means no two people with autism are exactly alike. There is a saying within the autism community that when you’ve met one person with autism, you’ve met one person with autism. The thinking and learning abilities of people with ASD can vary from severely challenged to gifted.

Studies continue to show the social and emotional benefits of the grandparent bond for all involved. Kameron was identified with ASD in preschool.  Initially, his grandmother didn’t believe it. She didn’t recognize this child the doctors were describing. After all, her grandson wasn’t unloving and non-communicative. She understood his special ways of communicating his wants and needs. As she began to learn about ASD, however, Karen started to recognize some of the behaviors. When her second grandson was born, the signs, although different, were easier to spot.

After the initial denial, the road to acceptance can be a painful journey. Although in shock when Kameron was first diagnosed, Ladasia had her mother’s full support.

“She just reassured me that they’re OK and nothing will change. They’re still them,” said Ladasia.

Karen said she does worry sometimes.

“I worry about what will happen to my grandsons,” she said. “I worry if they will ever be accepted, especially my oldest grandson. To think that they won’t be, that’s the hardest part.”

Differing styles of parenting the boys can be an issue at times. While Ladasia tries to keep as much routine as possible at home to reduce meltdowns and sensory issues, Karen openly admits that she doesn’t promote a structured environment.

“I pretty much let them do whatever they want,” she said. “My daughter gets mad at me because I let them jump on the bed at my house.”

Ladasia acknowledges, however, that she would have a difficult time without her mom’s help.

“She’s my relief. When the children were younger, my mom lived two blocks down and was very hands on,” said Ladasia. “She had them the weekends, after school. All the time.”

Their grandma also encourages the boys to find their own ways to express themselves. This includes singing, dancing and writing on the walls. The first time Kameron ever wrote his name was on the wall. At 6, Kameron is just beginning to use words to interact with his family.  Five-year-old Kamari found his voice through music. He started singing the song “Firework” from the movie “Madagascar.”  After finding his voice with music, he started communicating socially.

In addition to worrying about her grandchildren, Karen worries about the well-being of her daughter.  It is important for her to soften the burdens of her own child’s pain and responsibilities. Not only does she see her child struggle with all her personal challenges, she also feels the pain her child feels when behaviors are misunderstood by others.

Ladasia has said that she sometimes doesn’t like the kind of attention Kameron’s behavior attracts.

“It makes me sad, so we spend a lot of our time home,” she said.

It is hard for Karen to watch her daughter struggle in that way.

“My daughter works so hard as a certified nursing assistant, and she’s young. I know it’s hard taking care of them, so every chance I get, I help,” said Karen.

Although raising children with ASD has its challenges, it also has its gifts. Karen has seen her grandsons and her daughter blossom in so many ways. When asked what she wants people to know about grandparenting a child with ASD, she said, “I don’t see autism. I see my grandsons. They’re just children like any other children.”

Sharon Cole lives in Delmar and is a licensed speech-language pathologist and proud grandmother. Her goal is to enhance children’s lives through love, laughter and language. She can be reached at [email protected] or www.facebook.com/britishnannyslp.

Vodka with a death wish: Highly anticipated spirit in pre-release