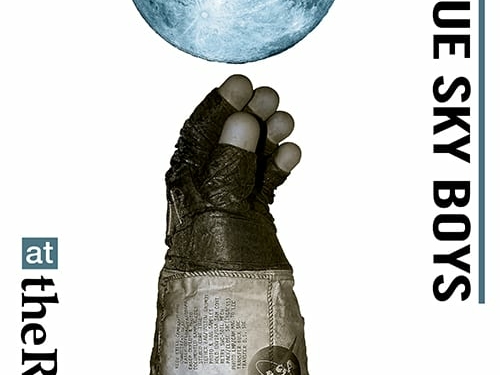 ALBANY — Fun times for all are had at CapRep’s latest production, The Blue Sky Boys.  “Boys” and “Sky” are the key words here, for “Sky’s the limit” due to the giddy goings on of the seven boy wonders galloping across the stage.  Under the inventive direction of veteran director Gordon Greenberg (Jacques Brel, Breaking Up Is Hard to Do, 33 Variations), The Blue Sky Boys fills the stage with fantastic giggles that the audience plays with like happy children Christmas morn.  This is a play and a production that offers much mirthful merriment.

The Blue Sky Boys is a fanciful take on the moon race — spoiler alert in 3,2,1…the U.S.A. wins — tracing through the play’s loopy trajectory the origins of the high stakes bragging rights between the United States and the Union of Soviet Socialist Republics, from 1961 to that fateful July afternoon in 1969, almost exactly a month before Woodstock.  The Blue Sky Boys’ setting and characters seem a little more far-fetched, messy, and far-out than Woodstock’s, but that’s the stuff comedy is made on.  The race to the moon begins in the seemingly backwoods control room in Langley, Virginia as scientist-engineers Jed, CJ, and Vencel (Andrew Mueller, Shayne David, Etai Benson who play a brainier mix of Three Stooges+Marx Brothers filtered through Mythbusters’ sidekicks) almost literally get their butts kicked into gear by President Kennedy 25 May 1961 declaration at Rice University that America will be the first to the moon by the end of the decade.  Under uber-tightass administrator Howard Haggerty’s (a perfectly cast David Girard, who was, in fact, a last minute replacement) dictates, who delivers JFK’s speech as a list of demands, the trio rebel and resort to “blue skying.”

“Blue skying” turns out to be flying off into the wild blue yonder of their imaginations as the scientist-engineers conjure up muses like Buck Rogers, Galileo, and Apollo (Tom Templeton, Orville Mendoza, and Michael Goldstein) to inspire and to debate.  While set designer Paul Tate dePoo III’s banks of 1960s black and white screens, blinking lights, and wires look like something out that period’s sitcoms, Rob Denton’s lighting and projection designs kick them into orbit and beyond with giddying array of effects that makes the imaginary muses real and the audience’s eyes and minds spin.  The interaction of the trio of engineer-scientists and imaginary inspirers yields much of The Blue Sky Boys’ humor.  After a fumbling start, the scientist-engineers decide to kick the race to the moon design process into gear by giving the program a title, and Apollo has the following exchange with them, declaring “Name the Baby,” “Apollo?” Jed asks not paying attention, “Excellent idea” Apollo decides with a grin to the audience.

The physical comedy between the seven actors is energetically amusing, akin to Snow White’s 7 Dwarves whistling while they work on getting to the moon, mining the play for comic diamonds that they toss about with glee.  The highlight of the play occurs after Buck Rogers decides “I need a spin around the Solar System,” and the cast engage in a series of silly Monty Python-esque dances.

That this bumps up against the deaths of Apollo 1 astronauts on the Launchpad highlights the weakness of The Blue Sky Boys which tries to ladle on a seriousness to the madness that the play and the performers lack the gravitas to pull off.  There’s an attempt at a serious coda that’s undermined by the goofiness of what comes before it and what follows it: the cast singing “Dream a Little Dream of Me” accompanied by ukulele.  But great fun is had when the cast gets loony.  The Blue Sky Boys is best when it sticks to its “Rude Mechanicals” roots, and lets its “Pyramus&Thisby” spirit shine bright.  There’s a moon at the heart of that, too.

Olympic memories: Skip Parsons recalls the time he and his Riverboat Jazz Band were ABC’s official jazz band of the 1980 Winter Games in Lake Placid