Olympic memories: Skip Parsons recalls the time he and his Riverboat Jazz Band were ABC’s official jazz band of the 1980 Winter Games in Lake Placid 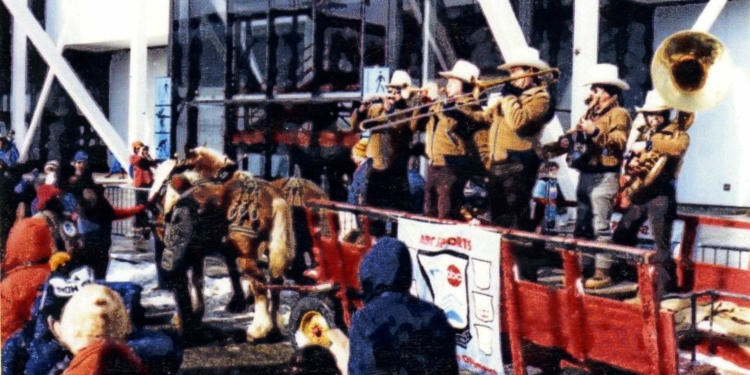 In 1980, Skip Parsons' Riverboat Jazz Band was hired by ABC to perform at several venues during the Winter Olympics in Lake Placid. Submitted photo

Bethlehem resident Skip Parsons has enjoyed many highlights during his 60-year music career with his Riverboat Jazz Band and Clarinet Marmalade.

But one moment sticks out for the 80-year-old — the time he and his group became ABC’s official band for its 1980 Winter Olympics broadcasts from Lake Placid.

For nearly two weeks, Parsons’ Riverboat Jazz Band played at several venues around the village, and even got the chance to kick off the first broadcast from the top of Whiteface Mountain.

As Parsons recalled, the band wasn’t even fully assembled when the request came in from the network producer.

“We couldn’t get everybody up there because of the credentials and the security and all that stuff,” said Parsons. “So it’s 11 o’clock at night and I’m in … Marvin Bayer’s office, and he was the chief honcho there. And he said, ‘We’re going to have you up there to start the Olympics up on Whiteface Mountain tomorrow morning at 7 o’clock.’ And I said to him, ‘We’ve got a problem. I only have three of us here. We still got three more guys down in the Albany area.’ He said, ‘Who are they?’ I give him a name, he said ‘What’s his address?’  And there’s a guy walking by the door. He says, ‘Hey Sam’ — or whatever he called him — ‘take this over to George and send a bus down to Albany to pick these guys up.’ Just like that, they went down in the middle of the night, picked those other three people up, and the next morning we were on Whiteface Mountain.”

The original plan had the Riverboat Jazz Band performing on a horse-drawn flat bed stage, but it was nixed when the police told them everyone needed credentials—including the horses.

“So, the broadcast people said to me, ‘We’ve got another plan.’ They put us on this (tractor), went to the top of Whiteface Mountain, and that’s where we started the Olympics—in the snow,” said Parsons. “We set up to play … the women’s downhill was supposed to be first. And we became the first thing on documentary tape in the Smithsonian Institute. They had across the front of Ernie’s tuba ‘1980 Winter Olympic Games, Lake Placid, New York.’ And they backed up, and there’s the band. And then they moved over to the women’s downhill.

“Stuff like that happened every day. Every day, something … just a miracle thing.”

And speaking of miracles, the Riverboat Jazz Band found itself in the middle of a wild celebration after the United States defeated the Soviet Union 4-3 in the “Miracle on Ice” hockey game.

“We were ready to leave (on the day the U.S. hockey team beat the Soviets) … and I get this phone call,” said Parsons. “Ed Lewi, who arranged that whole thing for us, was on the phone. He said, ‘Oh, you’re still here,’ and I said yeah. ‘Have you got a band?’ And I said, ‘I think so. We’re packing up.’ ‘Get down to the Olympic Arena. We might win the game.’ So we got down there, but it was so crowded that we couldn’t get in.

“So, we’re outside. I said, ‘Let’s stick it here for a little while. Maybe somebody will come around.’ And then all of a sudden, the doors flew open and they (the fans) come screaming. And I thought, well they must have won. Anyway, they came over and they tried to pick up Ernie (Belanger) with his sousaphone … and this was all on the front page of the New York Post the next day.”

Parsons hasn’t been part of any wild celebrations since that day in 1980, but he still feels the rush of playing Dixieland jazz wherever he goes.

To read the full feature about Skip Parsons, go to spotlightnews.com.