New service helps out with composting

by Marcy Velte
in The Spot
0 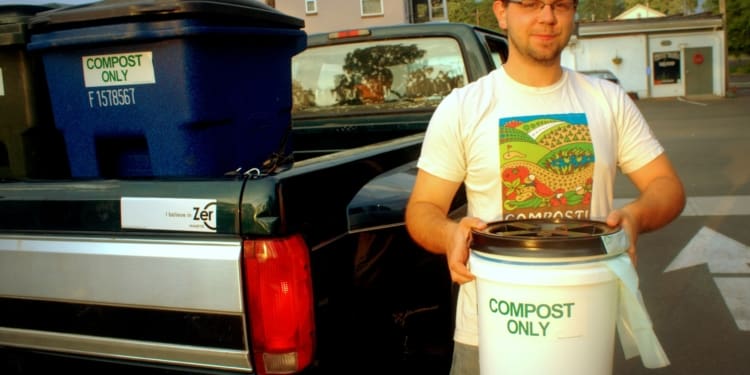 Home composting will soon be made easier for Bethlehem residents as an area food waste hauling company launches a pilot program in town.

In a partnership with the town’s Recycling Department, Empire Zero will begin offering curbside pickup of food waste for customers. The new program is in its first stages and is only being offered within Delmar and Slingerlands until the effort expands.

“We know people are busy,” said Empire Zero co-founder Tyler Holloway. “This is for people who may want to begin composting but just don’t have the time, space or know how to do it themselves.”

When residents sign up for the program, each homeowner will be given two large compost buckets with screw top lids to prevent pests and control odor. An Empire Zero employee will also stop by to give a short lesson about composting.

The program costs $5 per week. Each week, Empire Zone will come and pick up the food waste and then replace the two buckets with clean ones. Once a month, residents will be supplied with compost. Any unwanted compost will be kept by Empire Zero to be donated to local community gardens.

“Diverting food waste from the landfill is well aligned with our Sustainable Bethlehem program and will allow us to get closer to the town and state’s long-term ‘zero waste’ goals,” said Town Supervisor John Clarkson.

According to Clarkson, the town’s diversion rate is high for the region. At 65 percent, a lion’s share of the town’s waste stream is already being diverted from landfills, but food waste is the second largest category of material being thrown away. He said he would like to see food waste eliminated from the waste stream entirely.

Town Recycling Coordinator Dan Rain said recent reports from the federal Environmental Protection Agency found food waste makes up 18 percent of landfill waste in the United States. He said those greenhouse gas emission are 23 times more harmful than if the waste is composted.

“We are very pleased that Empire Zero chose to begin its residential pilot in the Town of Bethlehem due to the level of interest shown by our residents,” said Rain. “Now those households who don’t have the time or space for backyard composting have a convenient curbside pickup option.”

Holloway said he began his Castleton-based business with his father a year ago. His father has worked in the food waste management business at the national level, and after Holloway graduated from school, he asked his father about starting a business that was more local.

“I wanted to do something different and that made me feel good because I was helping not only my community, but the environment,” he said.

They began composting locally last April through a partnership with Schenectady County Community College. They soon expanded their business to include other area schools and hospitals. They are now starting a new joint venture with Bountiful Bread in Albany so the restaurant can eventually become food waste free.

“We know the restaurant business is very fast paced, but we think it can be done with the right training and by taking a few extra steps,” said Holloway. He is hoping other local restaurants will be willing to sign on in the future, along with the company expanding its residential services.

Holloway said he feels Bethlehem was the perfect place to launch the company’s residential program because of the dense population and the town’s environmentally friendly mentality.

Rain said Bethlehem has always been an innovative town when it comes to recycling, with one of the oldest recycling programs in the state. He said having curbside food waste pick up would allow residents to be ahead of the rest of the state when it comes to composting.

Rain said Massachusetts, Vermont and Connecticut have either banned or are setting up a timeline to ban food waste from landfills. The Department of Environmental Conservation is already looking into the matter and New York City is launching its own pilot programs, so Rain feels it’s only a matter of time before the state implements a ban, as well.

“We don’t want to be known as just another hauling company,” said Holloway. “We want to give folks the option of having a zero waste household or business.”

To sign up for the composting service, visit www.empirezerowaste.com. The company would like those interested in the service but not in the pilot zone to fill out a form, as well, for possible future expansions.

Candidate’s past comes to light