by John Purcell
in The Spot
Reading Time: 4 mins read 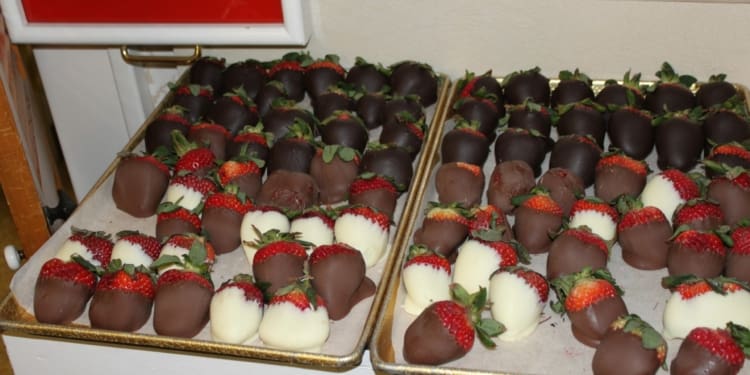 While chocolate is often seen as a can’t-fail Valentines gift, the traditional heart-shaped box of sweets might strike some as clichéd. But those looking to stray from convention will be met with a sweet surprise at Capital District candy shops.

One salty chocolate treat doesn’t come from a candy store, but a company known for its crunchy potato chips.

Saratoga Specialties Company, the maker of Saratoga Chips, offers a twist on their traditional treat. Chocolate Crum Crunchers offers their chips with a milk chocolate coating and its Chocolate Daily Double places the leftover potato chip crumbs into a milk chocolate concoction with some sea salt.

Dan Jameson, president of Saratoga Chips Company, said every time they make a batch of chips there are pieces too small to bag, so placing the crumbles into chocolate was a way to “celebrate it” in a delicious way. The chips are available in a number of area retailers.

“We were looking for a way to round out our line around the holidays,” Jameson said. “I have always loved salt and sweet together, and it is an unusual paring and just seems to work.”

The most decadent offering takes the Chocolate Daily Double to the next level by adding applewood smoked bacon to create the Chocolate Trifecta.

“We noticed chocolate and bacon was getting a big play in the national food scene with up-and-coming food flavor profiles,” Jameson said.

He believes the traditional chocolate gifts are going by the wayside.

“I think the days of giving the red, heart-shaped box chocolate is really growing old,” Jameson said. “To really express your love properly you should think outside the box and outside the traditional candy venues that are available to you.”

But Tom Krause, owner of Krause’s Homemade Candy located on Central Avenue in Albany, contends Valentine’s Day is all about the familiar.

“Valentine’s Day can be a very traditional holiday,” Krause said. “They usually know what that person likes, so they try to get something that they know they are going to enjoy.”

Still, Krause offers some different takes on chocolate. His newest creation is a chocolate high-heeled shoe, which is filled with truffles and candy and decorated.

“We tested this for mother’s day last year and they were crazy popular,” Krause said. “These shoes are just a little bit smaller than life size.”

Krause is hoping to sell a lot of the shoes for Valentine’s Day, but his biggest seller is a mainstay with the holiday: chocolate covered strawberries.

Between the day before Valentine’s Day and the day of the holiday, Krause’s store will make around 32,000 chocolate covered strawberries.

“It is probably the main thrust of what we do for three days,” Krause said. “They are very delicate and very succulent. It just really sort of sums up Valentine’s Day.”

Suhrada said he uses strawberries from California and offers them dipped in milk, dark and white chocolate. Suhrada and Krause both said while milk chocolate remains the favorite, dark chocolate has been rising in popularity.

If your valentine doesn’t want flowers but has a sweet tooth, Uncle Sam’s offers chocolate roses, which will melt in your mouth instead of wilting on a shelf.

“I sell them year round, but for Valentine’s Day I sell around 50 to 60 dozen,” Suhrada said.

The roses are solid chocolate and molded onto the stem and packaged. Suhrada said oftentimes chocolate roses can be hollow. The roses can be made in the three classic chocolates, along with sugar-free.

If strawberries are too traditional, The Chocolate Gecko, on Colvin Avenue in Albany, offers up a variety of dipped fruit including kiwi, pears and pineapple.

“Over the years people keep asking for a new fruit,” said Terra Stratton, owner of Chocolate Gecko. “We have what we think is a beautiful fruit platter, but we still do special requests.”

Gecko’s traditional offering is a mixture of the four fruits, but Stratton said special requests have seen her dipping apples, bananas and other fruit.

Stratton thought of something new to offer this year playing off the holiday’s iconic figure: Cupid Poop. The treat is a homemade marshmallow heart that can be “popped in” one at a time, with strawberry, chocolate and vanilla offerings.

“If you haven’t had homemade marshmallows you don’t know what missing,” Stratton said.

If you still want a heart-shaped box, Candy Kraft Candies located on Route 20 in Guilderland, offers several unique boxes, from a man’s work shirt with a tie to a pink with white polka dots and a white ribbon.

“Traditionally for years and years it was the red foil type box,” Bob Pikcilingis, owner of Candy Kraft, said. “It seems like it used to be men buying for wives or girlfriends, but now they reciprocate … so there are some male choices.”

Pikcilingis said the store fills very few boxes so customers can pick out what candies their significant other will enjoy. Cherry cordials are a popular treat, along with raspberry creams.

Since the raspberry creams are cast in starch, the store could offer them in a variety of shapes, with the traditional heart shape being a popular choice.

“The fact that we can make it heart shaped just makes it a winner on Valentine’s Day,” he said.