A look back in Delmar/Guilderland sports 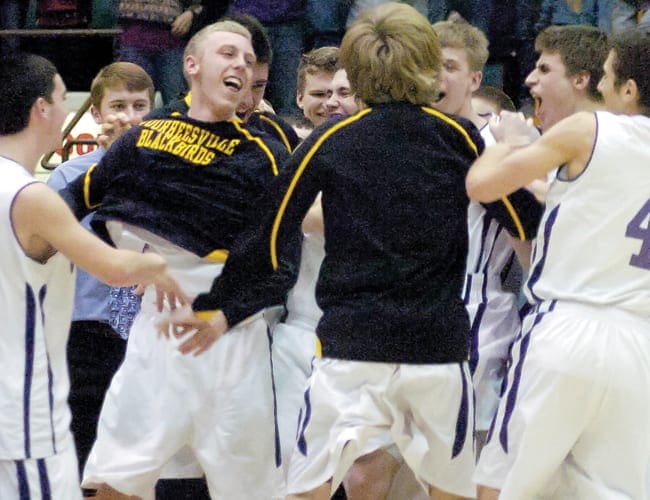 With two weeks remaining before the start of the spring sports season, it’s time to take a glance back at the recently completed winter season.

After beginning the season with a win and a loss, the Blackbirds embarked on an impressive 20-game winning streak that included the Section II Class B title – their first under head coach and Voorheesville alumnae David Burch.

The lone regular season loss came Dec. 13 when the Blackbirds lost to defending state Class B champion Watervliet 77-63. There could have been several more, though, according to Burch.

“There were a lot of games that we could have lost. It was just the drive and desire of these guys … just refused to lose.”

Voorheesville used a variety of ways to beat its opponents. Three-point shooting specialist Dylan Hensel gave the Blackbirds someone who could stretch opposing defenses. Inside, forward Logan Hotaling and center Joseph Vogel gave Voorheesville toughness on the boards. And, reserve guards Shane Parry and Isaiah Meaux could be counted on for a quick offensive spark.

However, the player that made Voorheesville go was Noah Crawford. The senior guard was fearless in driving to the basket, and he distributed the ball well to his teammates. Crawford was also one of the team’s top defenders in terms of forcing turnovers.

“That was a big key to our success,” said Burch. “It took a while for all of us to fall into our roles, and because different people stepped up at different times for us, we were hard to defend.”

Voorheesville loses its entire starting five plus reserves Slater Nolan and Jack Wakeley to graduation, but Parry and Meaux lead a talented junior class into next season.

“I had seven juniors up on varsity this year that are going to be ready to go next season,” said Burch. “You never know what to expect, but I’m excited about this group.”

The Dutchmen had the balance and the defense to do great things during the 2013-14 season, but Green Tech denied them their ultimate goal of winning the Class AA Sectional title by pulling away late for a 65-56 victory in the final.

Guilderland’s starting lineup featured five players who could each go off on a 20-point night if they chose to. Sophomore guard Andrew Platek led the way with an average of 15.9 points per game, but seniors Marc DuMoulin, Vincent Simeone and Matt Cerutti all averaged more than 10 points per game and Billy Floyd came close at nearly nine points per game.

The Lady Eagles shook off midseason injuries to Gabby Giacone and Erin O’Donnell to reach the Class AA Sectional semifinals, where they fell to Big 10 champion Albany 52-48.

The revelation for Bethlehem this season was sophomore guard Jenna Giacone. The younger Giacone sister averaged 13.5 points per game and stepped up when needed, including an 18-point performance in the semifinal loss to Albany.

Bethlehem’s swimming sensation had another standout season, as he earned All-American status with a time of 20.72 seconds in the 50-yard freestyle at the state championships. The only swimmer in New York who was better was Ithaca’s Ryan Nicholson, who claimed the 50 freestyle state title over Zemering with a time of 20.25 seconds.

The Bethlehem junior claimed her first state track and field title when she won the public school division championship in the high jump. Smith cleared the bar at 5 feet, 7 inches in fewer attempts than East Islip’s Faith Penny to win the public school title.