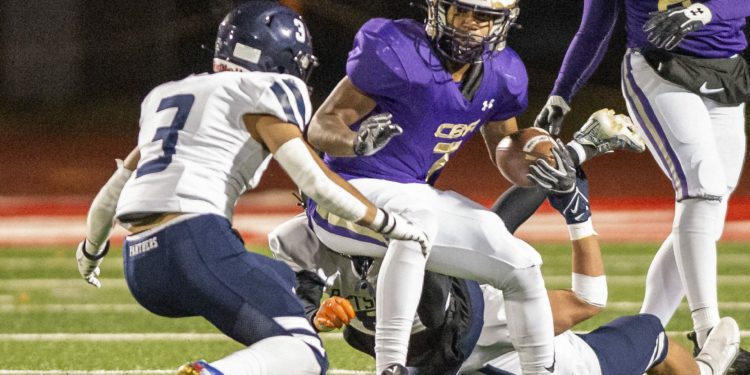 GUILDERLAND – Undefeated Christian Brothers Academy (12-0) advanced to the semifinals of the Class AA State Football Championship with a 27-6 win over Pittsford (5-7) on Friday, Nov. 18.

The Brothers running game was hitting on all cylinders after the first quarter led by quarterback Donald Jones and running back Jahmir Pitcher.

Pittsford jumped out to a 6-0 lead to start the game and it took CBA a while to get going, but Pitcher blasted down the field with a 25-yard-touchdown run to tie the score with eight minutes left in the second quarter, then again on a 1-yard-run with three minutes until the half. Carson Leto’s kick for the point after kick set the score at 13-6 with CBA in the lead at halftime.

The second half was all CBA.

Jones had another long run at the end of the third quarter, with a 35-yard run for a score (Leto kick). The Brothers’ defense was stiff, forcing Pittsford to punt each time they possessed the ball.

Running back Jahmir Pitcher jetted up the field for a 55-yard touchdown run (Leto kick) to round out the scoring for CBA.

The officials ended the game prematurely with 5:29 left because of a series of Panther penalties after a Marra interception on defense.

CBA will travel to Middletown High School next week.

To view the gallery click on the link here or on a picture below to open and swipe/click through the rest.