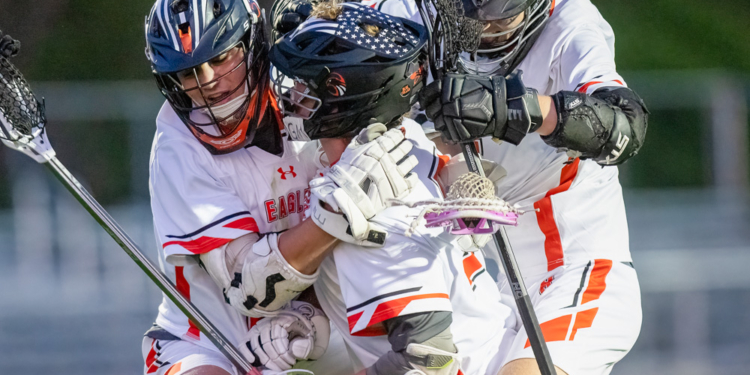 BETHLEHEM — In dramatic fashion, the Bethlehem boys lacrosse team got by Saratoga and will advance to the semis of the Class A playoffs.

The Nov. 4 seed Bethlehem was down by three heading into the fourth quarter after Saratoga, the No. 5 seed, scored three unanswered in the third to take a 7-3 lead. The Blue Streaks went into delay mode, and took nearly two minutes off the clock during its first possession without taking a shot.

But once Bethlehem, got possession it scored its first goal since the second quarter — and then scored five more for a 6-0 run to end the game and a 9-7 win.

Bethlehem will play at the top seeded Shenendehowa on Friday in the semifinals while Shaker, the No. 3 seed, will square off at the home of the No. 2 seed Guilderland. To get to the semis, Shen got a bye, Shaker beat CBA and Guilderland beat Colonie.

Against Saratoga, Henry Lane, Atticus Garcia, Dane Jones and Dan Johnson each scored two goals for The Eagles while Evan Dilligent chipped in a goal.

In goal, Owen Leary had 12 saves for Saratoga and Tyler Novak had seven for Bethlehem.

SPOTTED: Shaker bests CBA in first round of Class A boys lacrosse playoffs