SPOTTED: Schenectady beats Shaker with a bomb at the buzzer 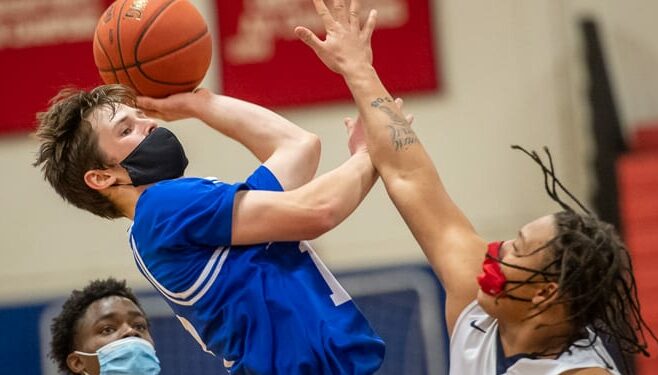 SCHENECTADY — In one of the most exciting games of the 2021 shortened basketball season, Shaker lost a Suburban Council matchup at the buzzer to the Patriots, 69-66.

The game was close from the opening tip to Christian Gomez’s arcing shot, with a hand in his face, from well beyond the three-point stripe to end it as the buzzer sounded.

Shaker came out of the gate strong by hitting six three pointers in the first quarter to take a 20-16 lead after one. Three more threes in the second gave the Bison a 37-36 lead at the half.

Shaker took a five point lead going into the fourth quarter, the biggest leads by either team of the night, but the Patriots outscored the Bison 21-13 capped off by Gomez’s thrilling game-winner.

Schenectady’s Jahsean Haggray led all scorers with 32 while Elijah Johnsen had nine and Gomez finished the night with seven points.

Joey Mirabile and Trey Mariano had 18 points each with four three pointers each for Shaker. Christian Haver and Nicholas Montalto had eight each with two threes each while Luke Wyrshyhora and Amari Basdeo had six each and Michael Simkulet had two.

Shaker (2-1) was on pause for COVID-19 related reasons and had its first four games of an already shortened season cancelled or postponed. The team will play at Troy on Friday and then host Averill Park on Saturday.