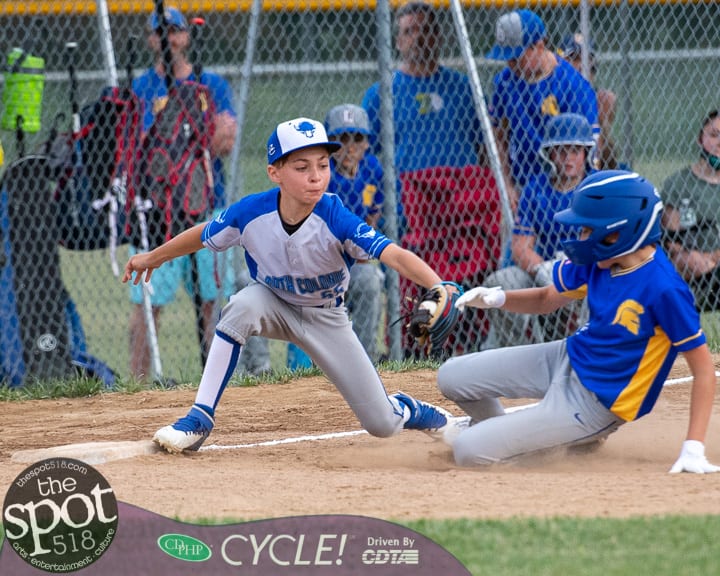 COLONIE — In one of the first signs of normalcy in months, kids are back to playing baseball.

And everyone — the coaches, players, fans and umpires — are excited to be back after sitting at home since mid-March, unsure about the pandemic and if there was going to be a season at all.

“We have been waiting a long time and it feels pretty good to be back here. This is the first time we have been out here in like eight or nine months,” said Branden White, of the North Colonie 11-year-old travel team prior to an Opening Day game against Clifton Park on Friday, July 10, at the Boght Road Baseball Complex.

The home team won the game 8-5 but the North Colonie 10-year-olds playing at the same time lost to Troy 12-6.

There are hand sanitization stations set up around the park, there are a limited number of spectators allowed and social distancing is required by players and fans alike. The umpire is calling balls and strikes from behind the pitcher’s mound and the base umpire is behind home plate, standing at least six feet from the catcher. There was no sharing equipment allowed, each team played with their own baseballs, and no high fives or other physical forms of celebration.

In North Colonie, players are not allowed in the dugouts and instead have their own personalized bucket to sit on while their team is at the plate.

The concession stand is not open, which is a financial hit, but there is not a significant drop off in the number of players.

“Our priority right now is baseball and whatever we have to do to get these kids out there we are ready to do,” said Aaron Malinoski, commissioner of North Colonie Youth Baseball Association before his squad took the field on Opening Day. “It’s been a long time coming and

we are taking it one day at a time and keeping our fingers crossed as we go.”

White, the 11-year-old, said it is the longest time he’s gone without playing baseball since he was began playing the sport at 5 years old. And, no, he is not worried about COVID-19.

Mark Zuckerberg promises to travel the entire United States in 2017