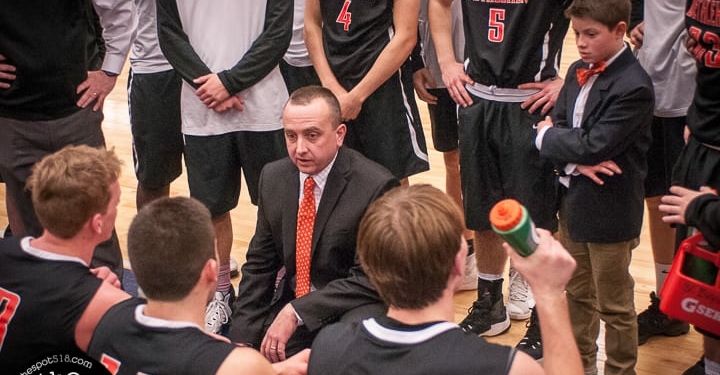 ONONDAGA – The Bethlehem Eagles found themselves nine points down with the game just shy of two minutes old. And they never managed to catch up.

The Eagles and the squad from Liverpool are similar in many ways. They are both scrappy, they both hustle, they both pound the boards and they both play hard nosed defense.

Liverpool, the Section III champs, just did it better on Saturday, March 11, and beat the Eagles in the state quarterfinals at Onondaga Community College 76-64.

The Eagles, who won the Section II championship for the first time since 1972, did make a run as the half was running out but Liverpool guard Kyle Butler nailed a Hail Mary from just inside half court at the buzzer to take a 44-30 lead into the locker room.

Bethlehem made another run, closing a 17-point deficit to a dozen as the third quarter was winding down but Liverpool answered with another three at the buzzer to take a 15-point lead into the final eight minutes.

Hayden Thompson and Mike Ortale led the Eagles with 17 each while Ryan Murray chipped in a dozen. Justin Barnes and Matt Riker had seven and Sean Flynn and Chris Harvey had a basket each.

Liverpool’s Najier Johnson led all scorers with 27 while his teammate Devon Mederios had 10.

Will be updated with reaction from the coach and players.