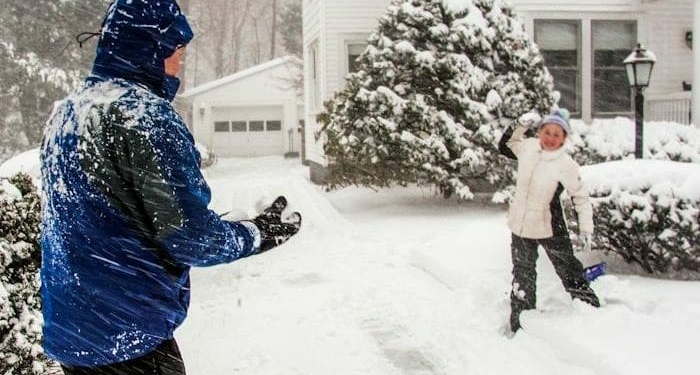 A father and daughter take a moment to play in the snow after shoveling off their driveway in Elsmere, Tuesday, March 14. Photo by Michael Hallisey / SpotlightNews

CAPITAL DISTRICT — It’s as strong as they said it would be.

The giant nor’easter predicted to cover the Capital District with as much as two feet of snow today and tomorrow, March 14 and 15, came to town a little earlier than expected. By 11 a.m. this morning, some areas of town had as much as 1o inches of snow.

Governor Andrew Cuomo had already declared a state of emergency for much of New York state Monday night, asking non-essential state employees to stay home. Local schools, too, decided to close prior to the storm. By Tuesday morning, local businesses followed suit. Crossgates Mall closed its doors by mid-day, along with some local banks and post offices.

At approximately 10 a.m., The National Weather Service issued a Blizzard Warning for the Capital District until 4 a.m. Wednesday, March 15.

A Blizzard Warning is defined as a severe winter storm with conditions occurring. Falling and blowing snow with strong winds and poor visibilities are anticipated, leading to whiteout conditions.

Area roads, usually bustling with traffic on this weekday, are clear of vehicles. Travel is discouraged, often times leading municipalities to issue travel bans due to extremely dangerous conditions.

The storm has produced a light power, making snowballs and snowmen difficult to build; however, should you be near a hill, it makes for a perfect day to go sledding.

Storm delays delivery of The Spotlight and TheSpot518