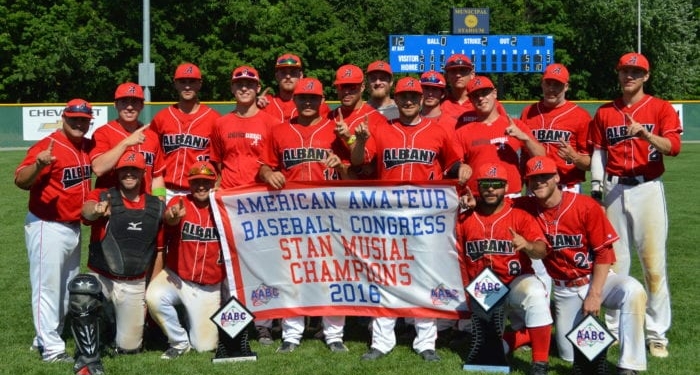 ALBANY – For the second time in four years, the Albany Athletics can call themselves World Series champions.

Watervliet native Chris Salamida figured heavily in the second game of the day. Salamida doubled twice, singled and scored two runs, and he pitched the final two innings to preserve the one-run victory.

Watertown built a 3-0 lead before Albany rallied in the bottom of the third inning. Salamida led off with a double, and then Cameron Overbaugh laid down a sacrifice bunt that Watertown’s pitcher threw into right field for an error. Salamida and Overbaugh scored on the play to pull the Athletics within one run.

Watertown scored a run in the top of the fifth inning to pull ahead 4-2, but Albany made its move in the bottom half of the frame. Dylan Sprague drove in a pair of runs with a one-out single to tie the score, Craig Mastroianni lofted a sacrifice fly to drive in the go-ahead run and RJ Pingatore added an RBI single to make it 6-4.

Watertown scored one run off Salamida in the top of the sixth inning, but Salamida shut the door after that to secure Albany’s second World Series title.

The Athletics needed a win over Watertown at the beginning of the day to force a winner-take-all second game, and they did just that as they racked up 13 hits in a 6-2 victory over the previously unbeaten Blaze. Overbaugh had an RBI double, two singles and scored two runs to lead Albany. Ryan Harper pitched a complete game for the Athletics, allowing two runs on six hits in seven innings.

Overbaugh and Salamida were named the World Series’ co-most valuable players. Overbaugh had 12 hits, eight runs, five stolen bases and three RBI, while Salamida batted .500 (7-for-14) and earned a complete-game victory on the pitcher’s mound, to go along with two saves, 13 strikeouts and one earned run allowed.

The Athletics concluded their season with a 40-9 record, the Albany Twilight League title, the Upper New York State Stan Musial title and now the Stan Musial World Series title. They won 30 of their final 34 games.

“This has been a remarkable season for our program, and (it) was an incredibly exciting weekend for the team,” said manager Joe Altieri. “We had so many different players contribute to the success of winning the World Series the last several days. It took us some time early on in the season to come together, but the team put it all together and played its best baseball the last several weeks including, these four days in Waterbury at the World Series.”

County legislature to vote on charter changes at August 8 meeting