County legislature to vote on charter changes at August 8 meeting 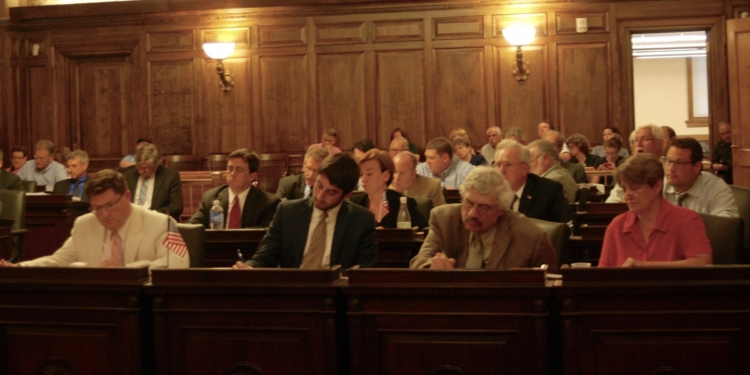 Just five Albany County residents spoke in front of the county legislature at a public hearing late last month regarding three proposed local laws that would change the county charter, including one that would potentially reduce the size of the Albany County Legislature itself and another that would create an “independent” redistricting committee. Four of the five speakers expressed their opposition to a recommendation that was made by an independent charter review commission last year to reduce the size of the legislature—from 39 members to, ultimately, 25. All three laws are expected to be brought to the floor for a vote on Monday, August 8.

The proposed laws are essentially a revised version of reforms originally suggested by the charter review commission – with a few exceptions. Under Local Law No. F, the legislature would be reduced, but only to 29 members and over the course of two decades, decreasing the number of seats from 39 to 33 after the 2020 census and 29 following the 2030 census. A second law, Local Law No. G, would remove the redistricting process from the direct purview of legislators, instead drawing a seven member general commission to be chosen from a pool of interested community members solicited through a public campaign, four of whom are chosen by the leaders of both parties and three of whom are chosen by the initial four. It would also provide for a minority-majority subcommittee—ostensibly to ensure representation of minority residents—chosen by the representatives of such districts, with the chairman given the deciding vote in the event of a tie resulting from an even number of minority-majority districts (those with a majority of eligible minority voters). Detractors believe that the selection process does not ensure enough independence and have argued in favor of other options, one of which would select members from a pool of retired judges.

The third and final piece of legislation would make a series of changes to the language of the charter, clarifying requirements and revising outdated language, as well as incorporate the county probation department and board of elections. Most of the changes seem largely uncontroversial, with the exception of the coroner clause. The four county coroners are currently appointed and do not need to be certified, requiring medical professionals to sign death certificates. While the commission recommended a medical examiner, the most recent amendment would merely require coroners to become certified within two years of taking office.

Two major arguments were made by those who oppose the downsizing, and most contested, measure: 1) that it would dilute minority voting power and; 2) that the current size of the legislature does not pose a significant enough issue, nor that is saves enough money, to warrant reduction at this time.

More important, he said, is for the county to work toward re-establishing trust with its minority communities, especially after the last three consecutive redistricting efforts by the county have resulted in lost lost suits and exorbitant legal fees after federal judges upheld claims that the new districts were under-representative of those communities. “When I speak to my constituents in the minority areas of my district, there’s a real trust issue,” he said to the approximately three-quarters of the legislature who showed up to the hearing on that evening of Tuesday, July 26. “Make no mistake, I respect everyone in this room and know myself, as a legislator, that it’s no easy task. But, over the course of history, there has been a trust gap that has developed between the process of redistricting that has taken place here at the county level and with our minority residents, and here we are tinkering, essentially, with the size of the county legislature. I think that before we can move forward in a way that is inclusive of all our residents here in Albany County, particularly our minority residents in the City of Albany, we need to rebuild that trust.

“Let’s really focus on making this a truly independent redistricting commission,” he concluded. “I think that will go a long way to show our minority residents that the Albany County Legislature is dead set on never repeat their mistakes again when it comes to drawing better lines. I think that should be the real focus here, I think that is the public policy crisis.”

Citing the work done by the charter review commission, Patricia Sibilia of the League of Women Voters spoke in favor of downsizing the legislative body, but against Local Law F. Instead, she said, the League favors the commission’s recommendation to cut the body to 25 members at the next redistricting. “They not only conducted a comprehensive review of our charter, but also compared it with the county charters of 20 other counties in New York state,” she said. “They asked for and received extensive input from every area of our county government. We highly value the work of this commission and feel every legislator should as well.”

The League of Women Voters, she said, supports three premises put forth by the commission: 1) that downsizing is a “profoundly important and complicated exercise, necessitating a complicated redistricting process,” and that; 2) that “any proposal that imperils the voting rights of minorities, inappropriately favors some municipalities and communities over others, or threatens the viability of a robust two-party system in County government would be a bad proposal and would call into question the validity of a reduction in size of the county legislature;” 3) and that for the next round of redistricting, there be a “non-partisan, independent, and inclusive reapportionment commission.”

Sibilia also spoke against Local Law G. “We whole-heartedly applaud the movement toward a stronger, more inclusive redistricting process, particularly in light of the legislature’s need to pay $1.7 million in legal costs last year,” she said. “However we cannot support proposed Local Law G as it is currently written.” The League, she said, believed it could made be a more truly independent redistricting commission by: explicitly excluding anyone holding a political position or having familial or employment affiliation with such a person; making sure that the process for selection of a majority-minority district commission (meant to serve as a check on the general commission) involves the same inclusive measures outlined for the general commission; language to ensure transparency and public participation throughout the process, including full and adequate disclosure of the data; and “the creation of an effective mechanism for legislative approval of the redistricting commission’s plan, including allowing a limited set of changes the legislature can submit back to the commission if they cannot gain approval upon the current commission’s proposal.”

Richard Harris, president of 100 Black Men of America in Albany and the county executive’s citizen of the month for August, was the last to speak. “Albany County has good government because we have a legislature the size that it is with 39 legislators,” he said. “In this day and age, what we’re looking for is greater communication with our constituents and our legislators. If you expand the area that the legislators have to represent, then you reduce the constituents voice. You need greater access; constituents need greater access to their legislator so that they can have a better voice and be better served. To reduce the legislature is focusing on the wrong issue, the real issue is good government for all the people. It’s not a matter of minorities or majorities.”

Any county resident who wishes another chance to speak on any of the proposed laws may do so at a public forum at 6:30 p.m. on Monday, August 8. The forum will immediately precede a law committee meeting, during which it’s expected that committee members will send the laws to the floor for a vote at the legislature’s monthly meeting—scheduled to begin at 7 p.m. on the same night.