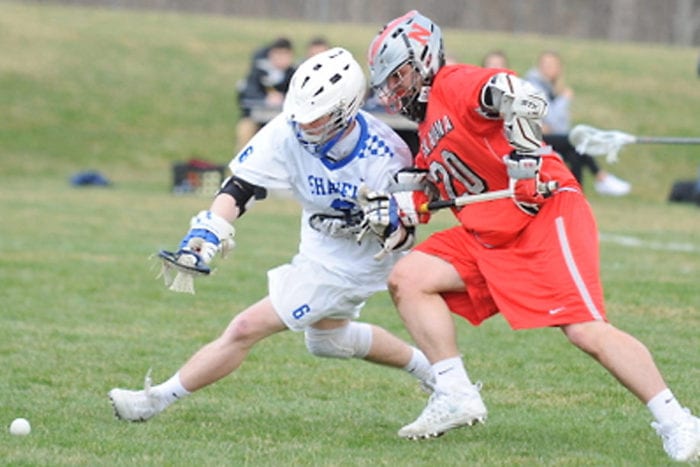 After losing its season opener against Niskayuna, the Shaker boys lacrosse team has rattled off nine wins. Spotlight file photo

CAPITAL DISTRICT — Jared Hoff and Michael Stiso each recorded hat tricks to lead Shaker to a 10-6 victory over Shenendehowa in a Suburban Council boys lacrosse game Tuesday, May 3, in Latham.

Goaltender Andrew Leahey stopped 13 shots for the Blue Bison, who outscored the Plainsmen 6-2 over the second and third quarters.

Elsewhere, Burnt Hills-Ballston Lake built a five-goal lead and held on for a 9-7 victory over Guilderland. Will Clark had four goals, and Dan Biesty stopped 18 shots for the Spartans.

Kevin Dyer struck for four goals, and Sam DiPace made 20 saves for Guilderland.

Guilderland outscored Burnt Hills-Ballston Lake 8-2 in the second half to pull away for a 12-6 victory. Isabelle Sericolo racked up six goals and an assist for the Lady Dutch, while Kadi Futia and Hayley Kmack each tallied twice.

Baseball
Shaker scored a run in the top of the ninth inning to defeat Columbia 3-2 in a Suburban Council baseball game.

Lansingburgh defeated Voorheesville 5-2 in a Colonial Council contest. Ethan Richardson doubled twice for the Blackbirds in the loss.

Softball
Guilderland scored three runs in the bottom of the fourth inning to break open a close game in a 7-3 Suburban Council victory over Saratoga Springs.

Pitcher Madison Harrigan struck out 16 batters in a complete-game performance, and she helped her own cause with three hits and two RBI. Taylor Carman chipped in with a pair of hits and an RBI for the Lady Dutch.

Bethlehem edged Niskayuna 2-1 on the road. Stephanie Konas drove in the winning run for the Lady Eagles.

Michele Winn plated the lone run of the game as Shaker shut out Columbia 1-0.

Shaker finished first in all three relay events, while James Newsom earned victories in the 100- and 200-meter dashes for Colonie.

Southern Rock from Canada: The Sheepdogs play The Hollow Thursday