Southern Rock from Canada: The Sheepdogs play The Hollow Thursday 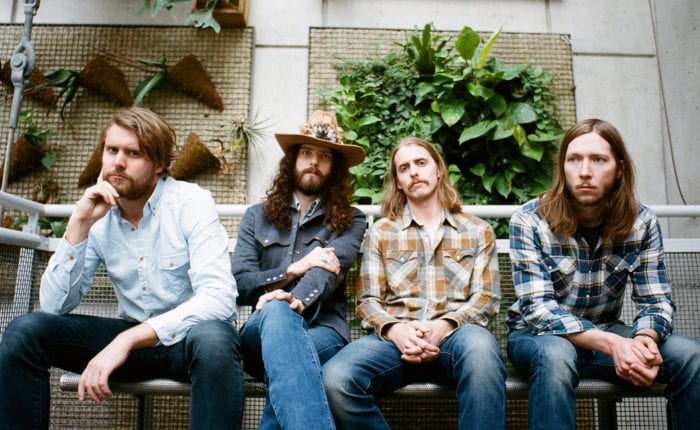 With four JUNO Awards under its belt, The Sheepdogs is one of the premier musical acts out of Canada, and likely the best band you’ve yet to hear. Submitted photo

ALBANY — It may just be a matter of opinion, but today’s music is crap.

Auto-tune and other technical tricks leave much for music fans to imagine, “What does the artist really sound like?” Some folks just want to hear their music like it’s 1999, when artists like Prince were known to write, sing and perform his or her own music. And, somewhere out there, it still happens. But, it’s not Top 40. Not in the United States, at least.

The Sheepdogs are something of a throwback. The band has been labeled as a Southern Rock group that evokes thoughts of The Allman Brothers and Creedence Clearwater Revival. These bands had their days in the sun predominately in the 1970s, before Sheepdog lead singer Ewan Currie was born. Nonetheless, it’s that music that has had a heavy influence upon his life, and his song writing.

The 31-year-old often describes his hometown as “isolated.” The band hales from Saskatoon, in the Canadian province of Saskatchewan, which is nearly twice the size of Albany. But, unlike the Capital City that is nestled on the crossroads that connect New York City, Boston, Montreal and Buffalo together — roadways allowing tour buses to stop along the way — Saskatoon was not a destination point for current acts.

“Growing up, definitely my dad turned me on to some music. Certainly Chicago,” said Currie.  Currie discovered an appreciation for musical arrangements often found in classical music through his father. Chicago, which often incorporated big horn sections on its hits, appealed to both father and son. But, son found Hendrix and Page, and with that, a love for the guitar. “I was 16-years-old when the whole Napster thing was at its peak,” he said. “If you were a 15-year old, 16-year old kid, with an insatiable thirst for old music like I was, Napster was heaven. You’d learn about one band and find all their songs, and then you go on the Internet and find out who influenced this band, who were they similar to, who did they influence. Then, you were just a few clicks away from more good music.”

And, in 2016, good music is found within The Sheepdogs, four-time JUNO Award winner — JUNO is the Canadian equivalent of the Grammy Awards in the United States. And, over the next few weeks, the band is touring aggressively through the Northeast with a stop in Albany at The Hollow Bar + Kitchen on Thursday, May 5.

The Sheepdogs have continued to follow in the footsteps of Canadian rock legends including Neil Young, The Band and The Guess Who with a bold take on classic guitar rock and polished retro sound. The band worked with Patrick Carney of The Black Keys to produce tracks for its 2012 self-titled LP which debuted at No. 1 on the Canadian Top 200 SoundScan Chart, and also garnered three No. 1 singles.

The Sheepdogs has been touring extensively in support of its new album “Future Nostalgia,” released last October through Dine Alone Records. Continually bringing “pure, simple, good-time music,” as singer/guitarist Ewan Currie puts it, The Sheepdogs has brought its raucous energy to packed venues across Canada and Europe.

“We do pretty well in our own country of Canada, but we’re still pretty small potatoes in the U.S.,” said Currie, a perception he said the band is trying to change. “We’re trying to establish some kind of connection. … We’re trying to find all those people who love Rock ‘n’ Roll like we do. We know they’re out there. I see them online, and there our other bands out there playing a similar vibe that have had success, too.”

The Hollow Bar + Kitchen is located on 79 N Pearl St. in Albany. For more information, call 426-8550 or visit thehollowalbany.com.

Bethlehem Town Board to oppose pair of oil pipelines: Members to discuss proposed Pilgrim project on May 11