by Rob Jonas
in Sports
0 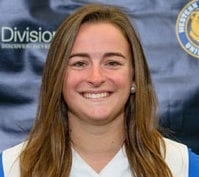 The senior third baseman belted five home runs over a two-week stretch — her first five career collegiate homers — to help the Golden Bears win their second conference championship in a row. Two of her homers came during a doubleheader against Amherst College Wednesday, April 27.

Pezze was named Western New England’s female student-athlete of the week for her efforts. She was also named a third team all-conference player.

Free seedlings for Colonie residents on May 7