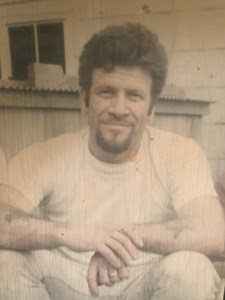 Chuck was born in Salem, Massachusetts to William and Lucy (Lulu) Wrest and had one sister, Daureen Peterson (predeceased). He grew up on a farm in Topsfield Massachusetts where his parents both worked. He went to school in Topsfield where he was often in trouble with his teachers yet somehow in his senior year, he was nominated as the most likely to do and become many things.

After high school, he joined the US Navy where he worked as a machinist mate on a submarine while traveling to places like Cambodia, Italy, and Korea. As a young man, he loved motorcycling and enjoyed traveling down the coast on his Harley with his Navy pals and competing in Enduro racing on his Triumph in the White Mountains of New Hampshire. Chuck was no frills and had a rough exterior but was a big teddy bear of a man.

He lived most of his life in Massachusetts, New Hampshire, and upstate New York. Even though he moved more than 20 times, you can bet he had a favorite coffee spot in every town!

Chuck was a very creative, charismatic, and capable person. In his 20s he wanted to learn autobody work but had no experience. To look the part, he bought a set of tools and ran over them repeatedly with his car until they looked used, and he then learned as he went. He did custom autobody work for most of his career until 1985. During that time, he had become well known as the best for autobody work on antique cars and customers would drive from out of state to find him. When they did find him, they’d know it- he’d always have a cup of coffee in one hand and a cigarette in the other! After retiring, he became certified to teach autobody repair to Vocational Education students, though he never got the opportunity.

In his 30s Chuck bought an antique rum-runner boat, ferro-cemented the hull, and turned it into a beautiful houseboat. His plan was to take it on a trip to sail southern waters. That never happened but he and his young family lived on the houseboat in Beverly Harbor for a few years. He also spent some time driving tractor-trailer under the name Rabbit Trucking. Customers liked the name because it implied he was quick but ultimately, being away from his family became too difficult.

Chuck’s creativity continued. If what he needed or wanted didn’t exist, he’d just take pencil to paper and design it, and then build it or weld it from scratch. As a welder, he created original art pieces of forged and welded wrought iron which he gifted and sold locally. Some of the kids’ teachers got incredibly unique and amazing presents.

Chuck also gained a bit of notoriety as a driver on the NE stock car racing circuit. The time he spent racing stock cars with his partner and brother-in-law, Bob DeBoer was a favorite time in his life. When he raced, it was a family affair- Chuck and Bob would gather up all their kids and travel to Star Speedway in Epping, NH to watch Chuck race on Saturday nights. They won quite a few races!

Some of Chuck’s other favorite things were roses, taking care of animals, and gardening. He always had a great love for horses and at one point, worked as a trainer for harness racing. He also made the very best apple pie!

Chuck would tell anyone who would listen that his most valuable assets were his children, whether biological, adopted or the many children and young adults he fostered over the years. He truly loved every one of them. His children include his daughter Raven from his first marriage to Roxanne Wrest, his three children: Aurie, Dennis, and Brenna from his second marriage to Lois Reynolds and his seven children including Luke, Isaac, Saveth, Matthew, Christa, Gina, and Jeremiah from his third marriage to Lois (Tammi) Wrest.

He was deeply saddened by the current state of the world and said people are too quick to replace things but not repair them and that one-day delivery is ridiculous. He was troubled by the extreme hatred displayed toward others, all the suffering and loss that came as a result of the pandemic, and the political divide of the country. In his opinion, society is increasingly eager to discard the elderly and people with disabilities.

Chuck vehemently hated growing old, and this is an understatement. He had always been strong, fierce, and capable of doing just about anything, but as the years passed, his body began to fail him. There were many things he wanted to do or teach his family to do that he no longer could. This, on top of a tremendous amount of loss, led to an underlying unhappiness in him that was ever-present, even on his best days.

Rest well, Dad. We love you.

Chuck did not want a funeral service, so in honor of his wishes, there will not be one. We know many people cared about him and shared special times with him, so we encourage family and friends to utilize this space to share memories and stories as they wish.

Everyone who knew Chuck knows that his love and care for children was paramount in his life. For years, he gave regularly to his favorite charities in support of children with needs like those of some of his own children. In lieu of flowers, and only if you are able, please consider a donation in his memory to St. Jude’s Children’s Research Hospital stjude.com, Shriners Hospitals for Children lovetotherescue.org, or Ronald McDonald House Charities rmhc.org.