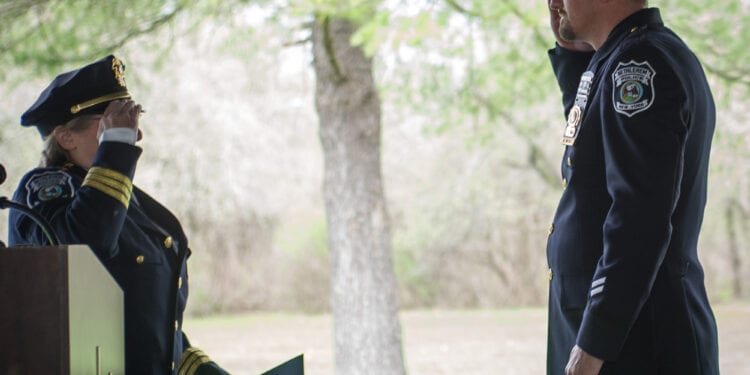 DELMAR — The Bethlehem Police Department honored officers and staff for performance during 2020 in a ceremony at Bethlehem town park on April 19. New officer Alexander Hazelton took his oath of office and Officer Roy Swann was sworn in as a new traffic investigator.

Hazelton is a life-long resident of Bethlehem and a 2012 graduate of RCS High School. He has a degree in criminal justice from Hudson Valley Community College. He attended the Zone Five Regional Law Enforcement Training Academy and served with Town of Coeymans Police Department before coming to Bethlehem.

Swann grew up in Selkirk and also graduated from RCS in 2012. He is a Platoon Sergeant in the Marine Corps Reserves based in Newburgh. He attended Liberty University before starting his law enforcement career with the Albany County Sheriff’s Office. Swann joined the BPD as a patrol officer in 2016. He credentialed as a Child Passenger Safety Technician and USDOT Commercial Vehicle Inspector.

Chief’s Achievement Award (3) – Commander Adam Hornick received two, one for extraordinary efforts during the COVID pandemic and the other for leading the upgrade of the department’s computer system.

Chief’s Achievement Award (4) – Officer Scott Galough for his service with the department since March 2001 and its IT Officer since 2007.

Officer David Caputo for his service to the department since 2001. He retired in January 2021.

Traffic Safety Investigator Craig Sleurs for his service since 2000. He retired in January 2021.

Officer Timothy Travis for his service since 2002. He retired in January 2021.

Detective Chad Rice for his work on an online fraud investigation that recovered over $160,000 for the victim in the case.

Detective Ken Beck for his work on a “grandparent” scheme fraud investigation that recovered $107,000 for the victim in the case.

Sergeant Michael Whiteley and Officer Amanda Mueller for their efforts in organizing, coordinating and implementing the 2020 Holiday Parade Special Edition that took the place of the traditional Holiday Parade due to COVID-19.

Officers Yekaterina Dickerson and Matthew Dring for an incident in December which they safely apprehended an armed subject having a mental health crisis.

Negotiator Laurel Award (2) – Commander Adam Hornick and Detective Chad Rice for negotiating a peaceful conclusion to a seven-hour stand-off without any injuries.

Sergeant Francis Muller for an April 16 domestic incident involving a subject with a history of violence. He was able to resolve the situation and have the subject surrender peacefully.

Sergeant Michael Whiteley, Sergeant Chad Ferraro, Officers Yekaterina Dickerson and Andrew Hynes for saving a man with CPR and an AED during an April 2020 domestic incident.

Crummey would offer discounts to volunteers