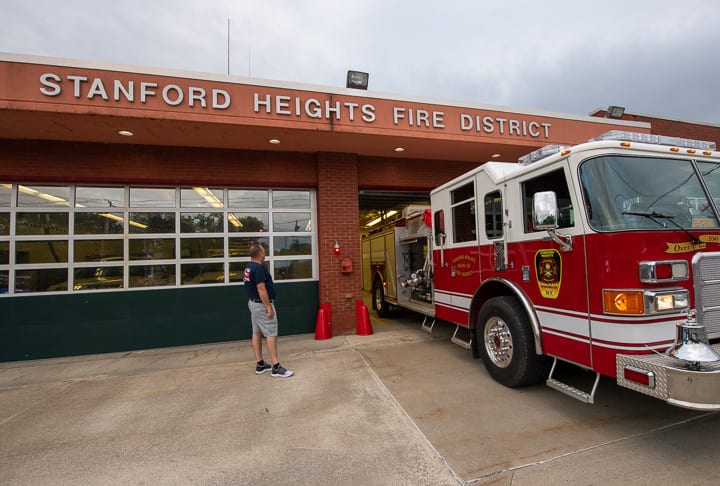 Second Assistant Chief Patrick Boccio demonstrates how tight of a squeeze it is to get trucks in and out of Stanford Heights Fire Department while Chairman of the Board of Commissioner Kevin Hulett watches. Jim Franco/Spotlight News

COLONIE- Two local building fires in the town caused mutual aid fire response on Friday and Saturday. In the time between the fires, an alcohol-related car crash on Boght Road took out power to that area for several hours.

On Friday, Jan. 20, at approximately 1:30 p.m., a fire was reported in a warehouse at 1204 Kings Road. The property is owned by BBL Construction.  Colonie police and the Town of Colonie Fire Services responded, along with the Stanford Heights Fire Department and numerous other local fire departments from Colonie and surrounding jurisdictions.

Firefighters were hampered by lack of water in the area and called in tankers to shuttle water to the scene.

According to police, the fire was extinguished over the course of several hours and the building appears to be a total loss.

One employee at the warehouse was transported to Albany Medical Center for evaluation, but was later released and is not injured.  No other employees suffered any injuries.

After an investigation, it appears the fire was a result of cutting in a maintenance area of the building, which ignited flammable materials in that immediate area.  The fire appears to be unintentional, and there does not appear to be any criminal conduct, police said.

No power in Boght

On Friday, Jan. 20, at approximately 10:50 p.m., Colonie police responded to the area of  Boght Road and Meadowbrook Road for a report of a car crash involving a utility pole.

The driver, a 25-year-old male from Watervliet, was operating a 2016 Subaru, which left the roadway and struck a utility pole.

The crash caused an interruption to the power service in the area and required Boght Road to be closed for several hours while the pole was repaired.

According to reports, the driver fled the scene on foot, but was quickly located by responding Officers and taken into custody.

He was found to be intoxicated, and was charged with Driving While Intoxicated.

On Saturday, Jan. 21, at approximately 3:00 a.m., a fire was reported at the Red Lion Hotel, located at 205 Wolf Road.  The hotel is not currently in operation and has been vacant for an extended period of time.

Colonie police responded, along with Town of Colonie Fire Services, the Shaker-Road, Loudonville Fire Department, and multiple other fire Departments from Colonie and neighboring jurisdictions.

The fire was contained to one room on the top floor of the hotel, and was quickly extinguished.  The remaining portions of the hotel suffered water and smoke damage as a result of the fire.  No one was located inside the building, or nearby, when responders arrived at the scene.

There were no injuries.

The Town of Colonie has recently been addressing many issues at this location, including the security of the property.  Over the past few weeks, it appears that homeless individuals have been entering and staying inside the building.

“It seems over the past few months, it has become a place for homeless to congregate,” Colonie police Lt Dan Belles said.

Officers located and arrested Christopher Burnett, 44, Kalum Brezeale, 21, and Earlston Lindsay, 38, all of Albany. According to police, it appeared that the three were living in the building as well.  All three men were charged with burglary, a felony, and criminal possession of stolen property and possession of burglar’s tools, both misdemeanors. Brezeale was also charged with a felony count of criminal mischief.

All of these incidents are still open and active investigations.  If you know something that might be relevant to these investigations, please contact the Colonie Police Investigations Division at 518-783-2754.  If you wish to report a tip anonymously, you can call Capital Region Crimestoppers at 1-833-ALB-TIPS, or go to capitalregioncrimestoppers.com.