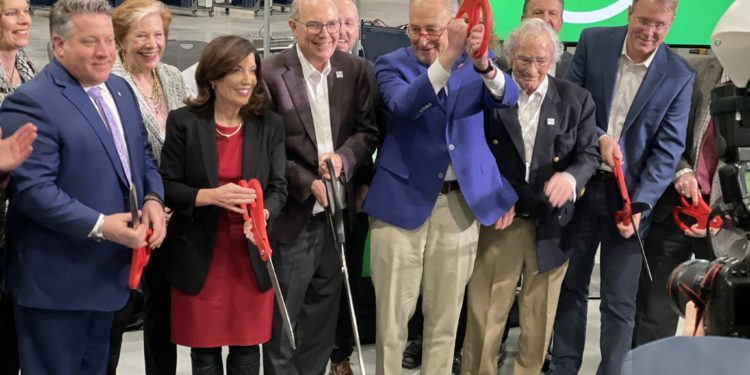 SLINGERLANDS — Roughly 10 months after it broke ground, Plug Power opened the doors to its 350,000-square-foot facility to politicians and community leaders – including U.S. Sen. Charles Schumer and Gov. Kathy Hochul – in a ribbon-cutting ceremony on Thursday, Jan. 12.

Plug Power’s newest manufacturing facility, located at the Vista Technology Campus in Slingerlands, is already operational and producing the company’s line of GenDrive fuel cell systems. Since the company first announced its interest in building the facility at the park, it has carried the promise of creating more than 1,600 new green jobs.

“New York’s investment in Plug is an investment in the state’s sustainable future,” said Hochul. “This new manufacturing facility is creating good, green jobs in the Capital Region and beyond – helping communities around the world break their dependence on fossil fuels by replacing them with cutting-edge green hydrogen technology. Earlier this week I laid out bold initiatives to drive down polluting emissions across the board, and Plug’s expansion will help complement our efforts to create a greener, healthier New York for future generations.”

The $125 million plant will be used for expanding production, warehousing, and servicing of the GenDrive fuel cell product line, which offers drop-in fuel cell solutions for existing electric truck fleets.

In addition to creating more than 1,600 new, green jobs and retaining another 701 jobs in Albany County. Empire State Development (ESD) has agreed to provide up to $45 million in performance-based Green Excelsior Jobs Tax Credits to encourage the creation and retention of these green jobs.

“Almost exactly seven years ago, I stood on the factory floor of Plug Power’s Latham facility, and CEO Andy Marsh promised me that if I could deliver the incentives they needed like the Investment Tax Credit, that we would be cutting ribbons for New York jobs in the decade — and today a promise made becomes a promise kept,” said Schumer. “Today’s new manufacturing facility comes at the perfect time to power America’s fight against climate change and new federal incentives position Plug to create even more New York jobs for years to come building the 21st-century green hydrogen economy.”