Experts say mortgage rates are trending up to ‘normal’ 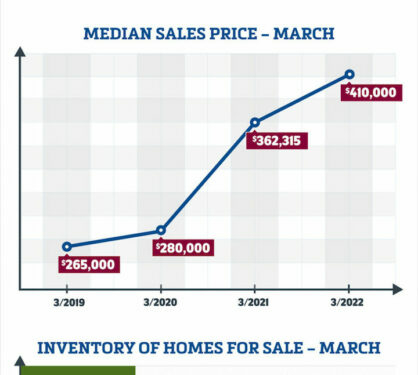 ALBANY – Mortgage rates in April averaged their highest level since 2010, while the inventory of houses continued to decrease across the state, according to the housing report released by the New York State Association of Realtors.

According to Freddie Mac, the monthly average on a 30-year fixed-rate mortgage rose from 4.17 percent in March 2022 to 4.95 percent in April 2022. This is the highest monthly average commitment rate since January 2010 when it stood at 5.03 percent.

Median sales prices continued to increase, climbing 28.8 percent from $365,000 in April 2021 to $470,000 just last month. This marks 24 consecutive months in year-over-year comparisons that the median sales prices have increased.

Realtors said early last month that they didn’t expect the market to immediately cool on the promise of high-interest rates, but coupled with a 40-year high inflation rate, they said consumers have less spending power.

“The rates of the last two years were an anomaly due to the pandemic. Buyers and potential buyers should keep in mind that historically, a 5 – 7 percent rate is still low for a 30-year fixed-rate mortgage – nowhere near the 16 percent rate buyers dealt with in the early 1980s,” said Laura Burns, Greater Capital Association of Realtors CEO. “It’s not the 2 – 3 percent of 2020 and 2021 but that was a forced low rate to keep money moving during the pandemic.”

In March, homes in the Capital Region spent just 40 days on the market before sale.

Inventory of homes for sale at the end of March totaled 1,547 units, down 44.6 percent from one year ago. Unsold inventory sits at a 1.3-month supply at the present sales pace, down from 2.2 months in March 2021.

Fewer existing homes for sale compared to last year turns attention toward new construction. With builders unable to keep up, new construction experienced a nearly 20 percent rise in median sale price over 2021 to $470,818 in the Capital District.

If compared to the prior “normal” year of 2019, new construction’s price increase is close to 30 percent. As long as demand is high and inventory is low, 2022 will continue to see year-over-year price increases if buyers continue to show up ready to pay “normal” interest rates in what remains an abnormal market, said Greater Capital Association of Realtors President Kendal Baker.

“As the Fed takes the corrective steps needed to get the economy on an even keel, with rising rates we know we’re really getting back to normal,” he said.