Apple on running for state Senate: ‘I can be part of the solution’ 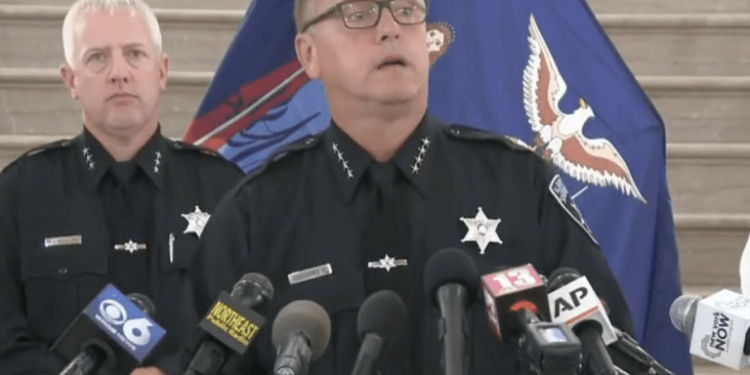 ALBANY – Albany County Sheriff Craig Apple said it’s not right sitting on the sidelines, criticizing state government for the actions it takes, so he is running for state Senate in a newly drawn District 43.

“I could stay down in Albany at my desk and be very safe for the next couple years and run another successful campaign as sheriff. I have a very comfortable position,” he said. “But I can’t sit here and be quiet or just criticize when I have a chance to and be part of the solution and offer a different perspective. Nobody up there has the background I have.”

The new District 43, drawn by a special master after the courts tossed the redistricting lines drawn by the Democratic majority in the state Legislature, include all of Rensselaer County, the towns of Colonie, Cohoes and Green Island in Albany County as well as southeast portion of Washington County.

Apple has not made a formal announcement because technically the lines, drawn by Jonathan Cervas, a political scientist at Carnegie Mellon, could change before the court-mandated Friday, May 19, deadline. The Court of Appeals, the state’s highest court threw out the lines drawn by the Legislature and signed into law by Gov. Kathy Hochul earlier this year because they were unduly partisan and favored Democrats. Since, the political scene, at the state and federal level, has been thrown into chaos that got more chaotic with the release of the new lines.

For the last decade — new lines are drawn every 10 years based on data generated by the U.S. Census — District 43 ran roughly along the Hudson River from Columbia County to Glens Falls. Daphne Jordan, a Republican, is the current senator but her Halfmoon home is now in District 44.

Andrea Smyth, a Democrat who ran an unsuccessful campaign against Rensselaer County Executive Steve McLaughlin in 2017, announced her candidacy for the state Senate in February, before the lines were drawn and still lives within the newly formed district.

On Thursday, she said she is staying in the race.

“Sadly, I’m now being told to move aside by men from Albany County. I will not be discouraged by men who see the path I have carved and now want to follow it,” she said in a statement. “I have collected the required signatures to appear on the ballot and secured the unanimous endorsement of the Rensselaer County Democratic Committee. I am not moving aside because men from Albany have told me to do so.”

Republican Assemblyman Jake Ashby, who also lives in Rensselaer County, had expressed an interest but that was before Apple announced.

Apple said of all the candidates, he is the best fit for the district, provided the lines don’t change yet again.

“I live in Colonie and I have a house in Rensselaer County and I spend a lot of time there. I know Rensselaer County well,” he said. “I have an $80 million budget here at the county. It’s not like I am walking in not knowing what to do in the state Senate.”

The Sheriff’s Department has more than 700 employees and oversees road patrols, security at the Albany International Airport and the county jail in addition to offering a host of services like a fire investigations, court security and a Domestic Violence Unit. He recently transformed a portion of the jail into transitional housing for the homeless.

Apple began his career in law enforcement in 1987 when he took a position as a corrections officer with the Sheriff’s Department. He became a deputy two years later and worked his way up the ladder. In 2009 was promoted to undersheriff and he was elected sheriff in 2011, taking over for long time Albany County Sheriff James Campbell He’s ran unopposed every four years since.

Public safety is his forte, and will be one of the areas he intends to concentrate should he run a successful primary and a successful general election campaign this fall.

“When you are making decisions about bail reform and correction changes and things like that, I will have a voice to explain the ramifications instead of watching things deteriorate in front of us,” he said. “I have two new grandkids and I want them to walk down the streets of this community and be safe. I want them to be able to have a childhood without having some re-offender attack them.”

He added his wife runs a small business in Colonie and “sees how she struggles everyday” so while he knows public safety, it is not the only issue he will focus on should he get elected.

Albany is known for paralyzing gridlock, and much of that is because it is a diverse state with the interests in New York City being polar opposites of those living in Pittstown, for example. As such, representatives have to work on final legislation that best reflects the interests of the entire state and that takes compromise and working across the aisle.

After essentially being an executive and calling all the shots in the Sheriff’s Department, Apple said he is confident he can make the transition and working with 62 others who have an equal say.

He said he plans on staying on as sheriff through the election and should he win, the undersheriff, Michael Monteleone will take over at least in the short term but Hochul could appoint someone to fill the vacancy. The seat is up for election in 2023.