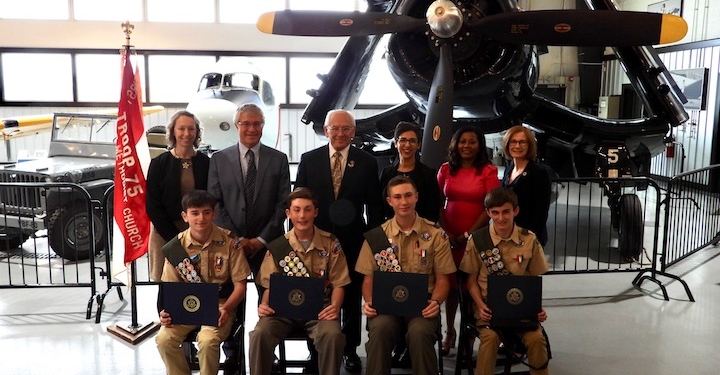 LATHAM — On Saturday, four local high schoolers received the highest honor a Boy Scout can receive when they were sworn in as Eagle Scouts at a ceremony held at the Hangar at 743.

To receive an Eagle Scout Badge, Scouts must complete a strict set of requirements in areas of leadership, service, and outdoor skills. Less than 10% of all Scouts in the United States reach this rank.

The four individuals who received this honor (pictured seated from left to right): Luke Zito, Grant Rinckey, Kevin Tully, and Sean Meek have committed themselves to the Boy Scouts of America and have dedicated countless hours to the mission of this organization to better themselves as citizens of the Capital Region.

Sean Meek is currently a sophomore at Bethlehem Central High School and is a distance runner for the Boys’ Cross-Country and Track teams. He started in Scouts as a Cub Scout and continued through to Boy Scouts in middle school. Sean’s Eagle Scout project involved designing and building garden planters for Our Lady of Mercy Life Center for residents and families to enjoy. Sean is an active youth member for the North Eastern Association of the Blind and a Computer Help Desk Volunteer for BCHS. Sean plans to study finance and data analysis in college.

Grant Rinckey is currently a sophomore at Bethlehem High School.  He has been active in Boy Scouts since first grade, joining as a Cub Scout. He runs track, swims and is a lifeguard at the Town of Bethlehem Pool. For his Eagle Scout project, he organized and led a toiletry Drive for the VA Hospital and installed a stone path and built wooden birdhouses and bird feeders for the VA Hospital Fisher House.  He plans to attend college and study Environmental Science.

Kevin Tully is currently a Freshman at Niskayuna High School. He has been active in Boy Scouts since sixth grade.  He has also earned a black belt in taekwondo and is a student pilot who flies gliders at Adirondack Soaring Club located at the Saratoga Airport. For his Eagle Scout project, he raised $800 for supplies and donated over 400 hours of time to build equipment used by the Niskayuna Little League. He plans to attend college and study aeronautical engineering.

Luke Zito is currently a sophomore at Bethlehem Central High School. He has been involved in scouting since the second grade. Luke is an avid outdoorsman and enjoys machine-operated vehicles of all designs. He is part of the high school’s computer help desk program. Luke plans to pursue mechanical engineering in college.

The Scouts BSA was incorporated to provide a program that offers effective character, citizenship, and personal fitness training for youth, which has been exemplified by these four individuals during their time as Boy Scouts.