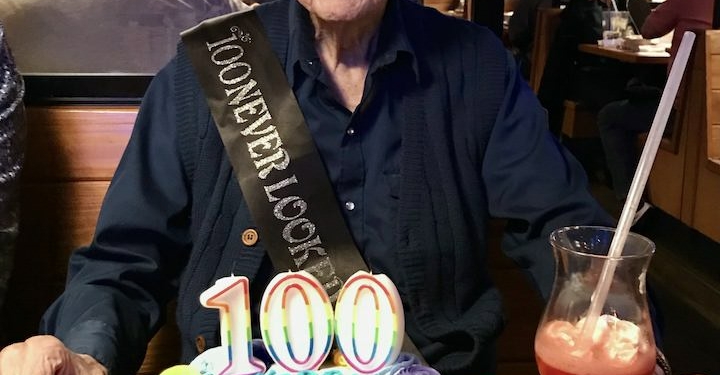 DELMAR-Reaching any milestone in life is something to celebrate, but to Ken Bailey reaching 100 years is no different than any other year. Bailey reached that milestone on February 2, and is in no hurry to slow down.

“I just think it’s absolutely incredible. There’s not many 100-year-olds that have it so together,” friend and minister Rhonda Cooper said. “He can run circles around all of us.”

Bailey was born in 1922, lived through the Depression, served from 1942 to 1945 in World War II, moved to Voorheesville in 1950 and has lived there ever since. He even has the title of Sir Ken Bailey from the French government as a reward for his service during the war. In recent years, Bailey has found a new life that gained him a new extended family and a new outgoing personality.

“It’s funny growing up my dad always worked and always occupied with work and then he’d come home and we’d sit together for dinner,” Jack Bailey Sr, Ken’s middle son, said. “But I don’t remember him being as outgoing as he is today back then”

Happy to Be Here

For Bailey’s 100th birthday, the celebrations spread out over two days and didn’t disappoint. On his last day of being 99, Ken, Cooper and her husband went down to the State Police Troop G Headquarters to meet with First Sgt. Trooper Rich Betts. Unbeknownst to Ken, 22 state troopers were waiting for his arrival to surprise him on his special day.

“They all saluted him, he saluted them back and it was really moving,” Cooper said.

After his day at headquarters, all Ken wanted to do was go to the Texas Roadhouse for dinner with the troopers. He was excited to have people sing happy birthday to him and dance with the servers.

Those that know Ken constantly joke that there are “seven degrees of Sir Ken Bailey”, similar to the phenomenon people may experience in relation to Kevin Bacon. The idea being there are seven people in between you and Kevin Bacon, or in this case, Ken.

“Wherever he goes, someone knows him,” Jack said.

A couple sitting behind the birthday table at Texas Roadhouse offered to pay for Ken’s meal, not knowing who he was. After speaking to the couple, his family found out that the couple lived on the same street as Ken’s grandson.

On his birthday Wednesday, Ken was invited to the State Capitol after his granddaughter and grandson-in-law got in touch with the governor’s office. He was given a proclamation for turning 100 and his service.

“It was the head of the NY Department of Environmental Conservation that did it, the senators were all there. I got a proclamation…two or three of them I guess. It was great,” Ken said.

Ken had never been inside the capital before, finding the view and the million dollar staircase highlights of his in-depth tour. Following his morning, he and his family had dinner at the Barnsider.

“It was kind of low key, but I thought it was meaningful for him,” Jack said.

This celebration was smaller than years before, but those were prior to the pandemic. Jack wanted to be safe over having a big celebration. To Ken, the size of the celebration didn’t matter much to him.

“I had two good days,” Ken said. “The way I look at it you have to celebrate the day because you can’t remember yesterday.”

Ken Bailey was born and raised in Delmar. Growing up during the Depression, he was never too worried about his family’s access to food.

The food security came mostly from his father who worked at A&P bakery repairing machinery. If there was a truck wreck, the family would be able to pay 25 cents on the dollar for anything that was damaged. An 18-inch wheel of cheese with debris stuck in it would be bought discounted and the debris cut away.

Ken worked at Lavery Farm at 10-years-old and eventually moved to working in the repair shop at 13-years-old. When his boss got drafted for the war, he was told to go to Orange Motors where a job would be waiting for him. Ken only worked there for a year before he too was drafted, but returned to the dealership upon his return in 1945 and worked there for 46 years in total.

In 1942, just weeks before serving in the war, Ken married Florence Eckler. The two met at Sport Haven which was Peter Harris Clothes on Kenwood Avenue. Sport Haven was a popular Friday night hangout with bowling upstairs and roller-skating downstairs.

“I had to skate around three or four times to get up a nerve to ask her to skate,” Ken said.

He recalls that in 100 years, marrying Florence and having his three sons were the best parts of his life. However, the newlyweds’ time together was cut short.

Bailey served in the 4th Cavalry, the oldest unit in the United States Army. That unit dates back to 1856. He trained initially in the Mojave Desert in California for the war in Africa, but the war in Africa ended prior to deployment so there was no need to keep training in the desert. The unit switched to Paris, Texas to train for the war in Europe.

“I never thought I’d get anything like that,” he said.

Ken received a Bronze star, the fourth highest honor in the U.S., for leading his men and the M20 armored car they were riding in back to safety after the German Army counterattack at Mortain, France. He drove the car into an almost-dried river bed after realizing they were behind enemy lines. The vehicle’s tires kept spinning when Bailey tried to move it, so the quick-thinking Bailey had his team cut down trees to get moving again and back to camp.

“I said, ‘Colonel, I almost left the car there.’ He said, ‘if you had, I would’ve sent you back after it,’” Bailey said.

For Bailey, that battle was a turning point for the war.

On May 8, 1945 the 4th Cavalry met the Russians 60 miles from Lepzieg, Germany and the combat subsided for him.

Ken’s return home, however, didn’t take place until November 1, due to a strike in New York harbor. There wasn’t a welcome parade, but his wife did meet him at 2 a.m. that day.

From Ken to Sir Ken

“He was kind of a person that always paid attention to us as kids and everything was done for the kids, he was that kind of person,” son Jack said.

When Florence died in 2005 it left him by himself and unwilling to do much of anything. However, a 2013 Honor Flight sparked a new fire. His friend and minister Cooper said she was no longer taking no for an answer from Bailey, after he declined to fly multiple times. Honor Flights bring veterans to Washington D.C. to see the monuments and memorials. Before the flight, Bailey was quiet about his time in his service.

“It wasn’t until my niece got to take the Honor Flight down to Washington D.C. and then he became part of the Patriot Guard Riders and it all came out,” Jack said.

Following his flight, Ken joined the Patriot Guards who escort veterans and their families during funeral services. The Honor Flight and Patriot Guard Riders gave Bailey a new lease on life and extended family.

In 2015, Ken received the French Legion Honor Medal which is the highest honor in France. The medal was given as part of a thank you from the French government for those who liberated the country during World War II. As part of the honor, Ken was knighted and officially became Sir Ken Bailey.

Now at 100, Bailey still loves riding ATVs and riding on the back of Patriot Guard Riders’ motorcycles. Ken, even at 100, still has some bucket list items to do.

“I got two more things I want to do: ride in a hot air balloon and I want to go on a zipline,” he said.