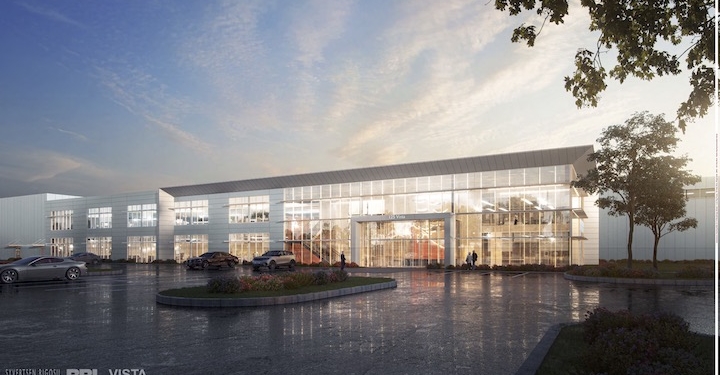 SLINGERLANDS — The town Planning Board received a glimpse of what Plug Power would look like once the proposed facility is finally erected at the end of the cul-de-sac on Vista Boulevard.

The presentation was part of a sparsely attended online public hearing on Tuesday, Jan. 18.

The facility, jointly used for office space, manufacturing and warehousing, is to be constructed with dove grey, insulated metal panels, and include a glass facade featuring sun shades to provide both relief and improve esthetics.

Approximately 17,000 square feet of the building juts across the town line, requiring approval from both the towns of Bethlehem and New Scotland before development is to begin.  The Latham-based company is proposing a subdivision and lot line adjustment, creating a new lot, that would include a 14.64-acre parcel in New Scotland and another 22.61-acres in Bethlehem.

In a letter to the board, Slingerlands resident Sheri Sanduski-Rutherford raised several concerns ranging from surging traffic volume, threats to public safety and the obliteration of the Helderberg Viewshed. She warned that construction would be “a very real threat” to the Historic LaGrange Cemetery placed at the roundabout, and could lead to landslides.

The Normans Kill, which borders the Vista Technology Park, has a history of unstable soil and field erosion. The town has witnessed three significant slides in recent years, two of which were along Delaware Avenue. There was the 2000 landslide that impacted traffic to and from the city of Albany, and a previous one behind Del Lanes Bowling Alley in 1982. A third, to which Sanduski-Rutherford referenced in her letter, occurred at the neighboring Mahar Road corridor in 1968.

“Vista has a record of over-promising and underachieving, with few accomplishments,” ​​she stated, voicing her skepticism. “The skeletal construction remains of the failed Monolith Solar at Vista serve as a recent physical reminder of how progress can be abruptly curtailed, tax breaks can backfire, and resulting blight can leave the town with limited recourse.”

To date, 107,500 square feet of office and commercial property have been developed at the park. Should plans proceed, Plug Power will be the first technological company since the park opened a decade ago.

The park’s courtship with Monolith Solar all but failed. The solar cell manufacturing company fell under financial hardship in 2018, but not before breaking ground on a new $5 million headquarters at the tech park. Its steel skeleton and surrounding property were later foreclosed and are under the possession of Pioneer Bank.

Homeowners fighting to find a house amid rising costs.