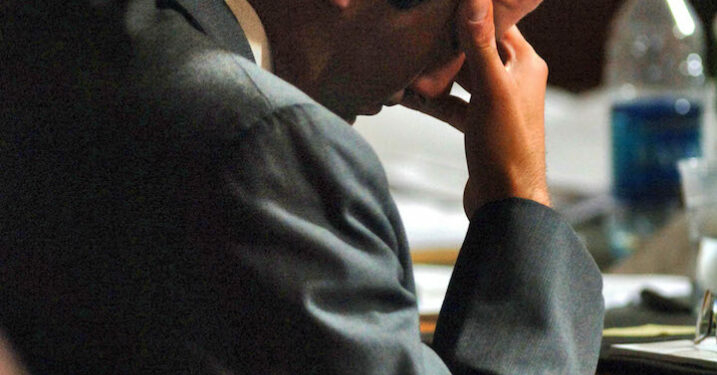 Christopher Porco avoids looking on as New York State Police Investigator Drew McDonald, not seen, describes the scene of the master bedroom of the Porco home in Delmar, N.Y., from the witness stand in the Orange County Courthouse in Goshen, N.Y., during Porco's trial Wednesday July 5, 2006. Porco, of Albany, N.Y., is accused of killing his father with an ax and injuring his mother in their Delmar home in 2004. (AP Photo/Philip Kamrass, Pool)

ALBANY — The state’s highest court has opted to not hear the Christopher Porco versus Lifetime television because it does not present any constitutional question.

In a one-sentence decision, the Court of Appeals unilaterally dismissed the appeal filed by the Delmar man convicted of using an axe to kill his father and attempt to kill his mother in 2004 without costs and without hearing arguments.

Porco, who is serving 46 years to life in state prison, sued Lifetime Entertainment over a made for television movie about the infamous rampage that unfolded in a quiet Bethlehem neighborhood.

The now 38-year-old claimed Lifetime presented a fictionalized account, and as such should have gotten his permission before airing the movie, “Romeo Killer: The Christopher Porco Story,” in 2013.

In 2017, the Appellate Division overturned a lower court ruling that dismissed Porco’s claim. According to state law, a business must get a person’s permission to use that person’s name, photograph or story for a profit. Porco claimed the film was based in fiction rather than fact and thus the company needed his permission. If the film were fact based, according to the court, it would have been exempt from privacy laws.

Porco was convicted in 2006. In 2012 he learned of Lifetime’s decision to make a movie about the murder and sued a year later to stop it from airing. He initially won an injunction and it was put on hold but the Appellate Division overturned that decision and the move — staring Matt Barr as Porco, Vincent Gale as Mike McDermott and Michael Hogan as Terry Kindlon — was broadcast in March, 2013, to a lukewarm reviews.

Porco filed a second lawsuit, naming his mother as a plaintiff. In a 5-0 decision, the Appellate Division dismissed the case and Porco unsuccessfully appealed to the Court of Appeals.

The saga gripped the well-to-do of Delmar, though. Peter Porco, Christopher Porco’s father was a well-liked and well-respected clerk of the state Appellate Division. He was found dead in the family’s Brockley Drive home near the Bethlehem High School, where Christopher had graduated just a few years prior.

A court officer was called to the Porco home because Peter Porco had not shown up for work. He found him dead inside the front door and found Joan Porco, Christopher Porco’s mother, upstairs in the bedroom clinging to life with severe wounds to her head.

Christopher Porco has exhausted all appeals of his criminal conviction. He is eligible for parole in 2052. He will be 69.