From Broadway to Four Corners 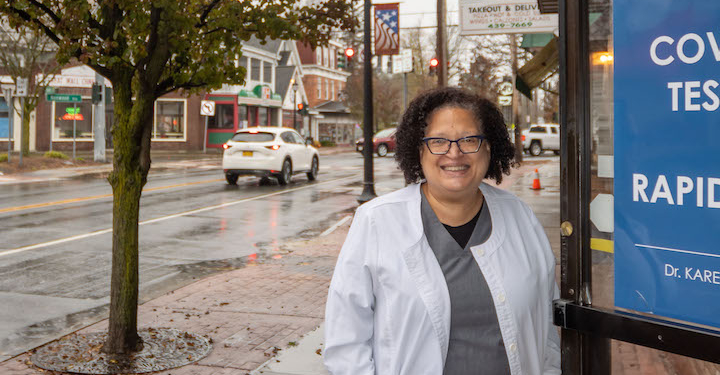 DELMAR- By March 2020, everyone  in the world learned all about COVID-19, but Dr. Karen Thornton knew something was wrong long before it was officially identified.

Last month she opened an additional office at the Four Corners in Delmar, bringing all she has learned about testing and treating COVID-19.

As a family practitioner seeing patients who worked in performing arts, people were coming into her office near Broadway with a sickness that she couldn’t quite figure out.

It wasn’t until wide-spread testing became available that Thornton knew   COVID-19 had reached the stages of Broadway and all over the  U.S.

“Pretty much a lot of people were coming to us,” Thornton said, “we got whole casts, firemen and police.”

She started her own private practice in 2002 in New York City. Her patients ranged from actors to ballerinas to stage hands to producers. A typical day, pre-pandemic, Thornton gave lots of physicals, championed women’s health, treated performance related injuries like vocal injuries or sprained ankles and invested considerable time in promoting PrEP, a form of HIV prevention. Then her performing arts patients started to come into the practice really sick.

“I couldn’t prescribe them anything (to treat them), because the commercial labs didn’t have the testing yet to prove it was COVID-19,” she said.

Shortly after testing was widely available, Broadway went dark, and Thornton saw an influx of people wanting to be tested. She and her practice teamed up with an urgent care facility where she  rented space and started mass testing for COVID-19.

“We kind of went into a synergistic relationship where we tested people and so did they,” Thornton said. “I was the doctor overseeing both.”

Thornton reached into underserved areas to mass test. Communities such as Harlem and Washington Heights and places like Riverside Church which had limited access to testing.

“I started talking to bishops and reverends and they first of all, felt left out and secondly like the people weren’t getting what they should be getting,” Thornton said. “That’s where I felt like I could go out and do this.”

It took a lot of convincing — or convincing people to convince other people — to let her come into the communities with mobile testing vans she had built and outfitted with sophisticated equipment.

Thornton and her team started working with the State and City Departments of Health to see which areas had flares of COVID-19 and then deployed her testing teams to help those areas.

Bringing baseball back to the Big Apple

At the start of baseball season in the spring of 2021 , Thornton and her team parked a testing van near Yankee Stadium to rapidly test fans that were unaware of the stadium’s . COVID-19 protocols. A few months later they switched gears to provide vaccinations to people going to games at Yankee Stadium and the surrounding community.

“That was a low vaccine uptake area,” Thornton said. “They actually increased [the vaccination] rate to 80 percent of that population in that area.”

To the Four Corners

“I drove past Four Corners and saw that First Care was up for rent,” she said. “It’s really easy to set up for testing and eventually it’ll be a doctor’s office.”

Thornton is usually in Delmar four days a week and primarily administers vaccines. When she isn’t, she is still testing  for COVID around Broadway.

Her testing center offers not only regular PCR tests, but also rapid antigen tests and rapid PCR tests. She believes that for now, it’s a need that had to be filled after hearing stories about a limited availability of testing  or that the lines to get tested were  too long.

On her quest combatting COVID-19 she has yet to have a moment of defeat, because of the help she had along the way. The frustrations in the early days of the pandemic, like not having a way to detect or treat it, have now faded. She has hope for the future, but says it is now a very informed hope.

“I don’t think COVID will be over until all of the world is fully vaccinated,” she said. “If enough people in a certain area are vaccinated then you’re good, but I don’t think we’ll ever get to that magic number.”

Thornton is excited and ready for this new act to help people combat COVID-19. She still believes that it’s a big roll of the dice, but thinks it was worth raising a new curtain at the Four Corners.