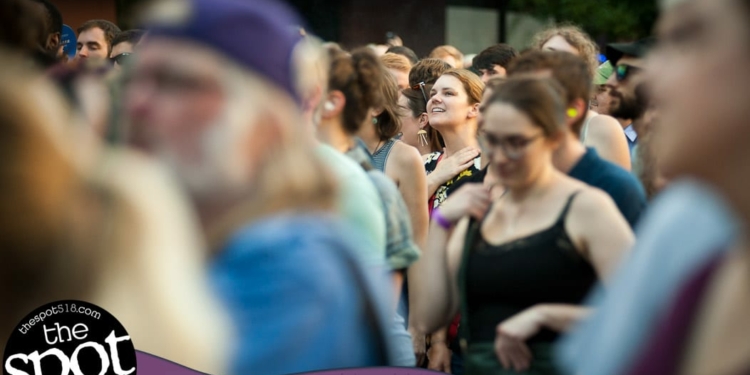 This year’s event focuses on a predominately local lineup with headliners with national clout to close things out.

It starts off with MVP Health Care’s YogaPalooza, a mass yoga gathering, and continues throughout with high-quality local vendors from some of downtown Albany’s finest dining, retail and entertainment establishments.

All performances will take place on the Remarkable Liquids Stage at North Pearl Street and Sheridan Avenue. DJs from WEQX will spin music between sets, and attendees are encouraged to enjoy food, beverage, and retail specials and events from nearby businesses.

This year’s PearlPalooza features performances from:

The Capital Region’s only street-wide yoga event returns for its fifth year to kick off the activities on Pearl Street in front of the Remarkable Liquids Stage at noon. Instructors from local studio The Hot Yoga Spot will offer a free, one-hour, all-levels yoga class led from the stage. Find more information and register for Yogapalooza here.

Timbre Coup was formed in 2007 just outside Albany in the town of Altamont. After many years and hundreds of shows alongside bands like The New Deal, Dopapod, Papadosio, Pigeons Playing Ping Pong, and Consider the Source, along with festival appearances at such events as Camp Bisco, .moedown, and Mountain Jam, Timbre Coup brings a little something for everyone. With dynamic compositions, melodic and haunting vocals, as well as slick chops, this quartet entertains with a fervor.

Encapsulating influences stretching across decades from psychedelic and jam-focused rock, to funk, post-punk, and even modern indie and post-rock, the Albany collective Glass Pony offers a sound that translates through generations, with a stylistic blend built to engage a broad listenership. With a focus squarely set on delivering the most captivating live performance possible, the band utilizes danceable grooves colored with virtuosic individual performances that deftly blend into a cohesive whole.

Jocelyn & Chris’s July release “Sugar and Spice” was lauded by American Songwriter as “pure American rock goodness” and was a Most Added US Radio Single for three consecutive weeks. The video for the track was also added to rotation on MTV.

Educated musicians all with backgrounds in classical, jazz and blues, the band’s newest work, Parallel Timeline, once again sees Slothrust leaning into improvisation — something that in the past has lent itself to the infectious energy of their live shows. Parallel Timeline, mixed by industry legend Billy Bush and mastered by Heba Kadry, is a masterclass in balancing tenderness with the fierce guitar work bandleader Leah Wellbaum has become known for. With a distinct yet unified sound that blends progressive rock, acoustic and pop, Slothrust has never been more confident.

PearlPalooza is presented by SEFCU, in association with WEQX, the Downtown Albany Business Improvement District (BID), and Sugar Productions.