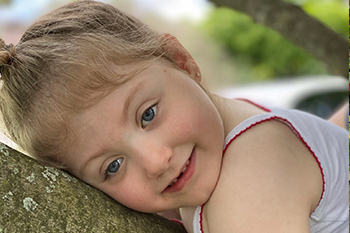 “Our little miracle,” is how Jackie Neumeister of Ravena describes her daughter, Abby. And indeed she is.

Before she was born, Abby was diagnosed with myelomeningocele, a severe type of spina bifida in which the baby’s spinal cord does not form normally. At the time, Jackie was told that Abby wouldn’t be functional and wouldn’t be able to walk on her own.

Faced with a potentially devastating diagnosis, the Neumeisters went as far as Philadelphia for a second opinion before they found Dr. Matthew Adamo, a pediatric neurosurgeon at Albany Med, who reassured them that Albany Med had the expertise to care for their daughter.

Together with specialists from the high-risk maternal fetal medicine group at Albany Med, Adamo monitored Jackie through the rest of her pregnancy.

When Abby was born in January 2018, she was also diagnosed with craniosynostosis, a birth defect where the sutures on a baby’s head fuse together prematurely. This prevents the skull from growing as the brain grows, which can affect cognitive development.

That’s when the team from Albany Med’s Cleft-Craniofacial Center stepped in.

July is National Cleft and Craniofacial Awareness and Prevention Month.

Adamo and Dr. Courtney Carpenter, a plastic surgeon and director of the Cleft-Craniofacial Center, performed Abby’s first surgery when she was only hours old, closing the area around Abby’s spine that hadn’t developed. At six months old, Abby underwent another surgery to distract the back of her skull. This expanded the space around her brain and allowed it to develop normally.

In total, Abby had three surgeries on her back and two on her head, all before her first birthday.
While Abby initially had a hard time walking because of the spina bifida, she’s now walking on her own.

“Seeing the video of Abby taking her first steps without a walker was amazing!” said Carpenter.
At three-and-a-half years old, Abby is a smart, vibrant toddler who loves to dance and sing. “She’s always been happy and friendly and outgoing in everything,” said Jackie, who added that Abby loves saying hello to everyone.

Abby continues to see Carpenter for check-ups, but they are becoming less and less frequent.
“Dr. Carpenter, Dr. Adamo and everyone else in the Cleft-Craniofacial Center have been with us since day one,” Jackie said. “They know what they’re doing, are always available if we have any concerns, and we don’t have to travel far away to see them. We love all of them.”

To learn more about the Cleft-Craniofacial Center at Albany Med, please visit:

This article was first published by Albany Medical Center at amc.edu.