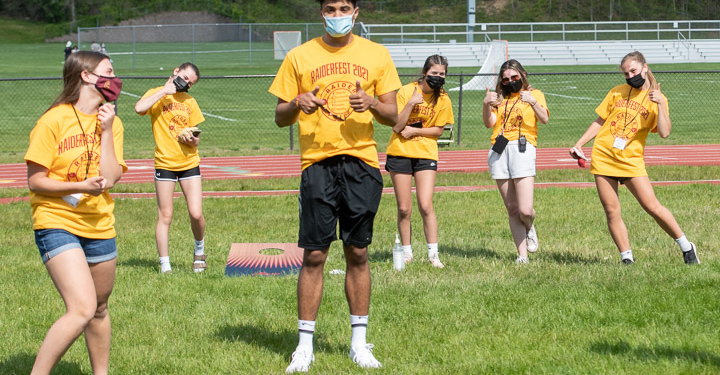 It was, by necessity, scaled down with fewer booths and attractions. And the individual elementary schools were given their own time slots for students and families to cut down on crowd size.

But, iCARE and the Colonie School District kept true to the core objectives of Raiderfest — to bring the community together and support a good cause. This year, thanks again in part to the pandemic, iCARE has chosen Northern Rivers to help the umbrella agency support and bring awareness to mental health issues.

“Along with this we keep a strong focus on our five core values of integrity, community, accountability, respect and empathy,” said iCARE co-President Colonie senior Ava Coogan. “This has certainly been a tough year to adjust to, and has been hard to throw our normal iCARE events and meetings. However, it hasn’t stopped us, and we were fortunate to see the community together once again here today.”

There was a “Ninja Lab” obstacle course and some other activities and informational booths. And there was a huge “Big Truck” display with a number of public safety organizations like the Colonie Police Department, the New York State Police, the Albany County Sheriff’s Department and a number of fire companies showing off their equipment.

But what epitomized what Raiderfest was all about was this year’s Kind Human Award recipient — Charlie Fernandez, a 7-year-old Saddlewood Elementary School student who earlier this year lost her courageous battle with neuroblastoma, an aggressive cancer that attacks the small glands on top of the kidneys.

“This young lady was a shining light in our community. She gave people hope and always inspired us to never give up. She was far from selfish. She put her best foot forward at all times, unwilling to let those around her pity her. Her smile was contagious. When she was at her lowest point, her spirit was positive and of course, she had a little bit of sass,” said iCARE co-
President Gabrielle Lupe. “She had no intention of being the center of attention however this girl deserves all the fame. She was an inspiration to everyone here and far beyond that. Teachers, students and parents all followed her story, rooted her on through and through because she rooted everybody else on. Her legacy and love will live on and we will never forget the impact she had on all of us.”

The award was given to the Fernandez family — her parents and her 3-year-old sister McKenzie Fernandez — during opening ceremonies kicking off Raiderfest at the Colonie High campus.

“It is an honor. Charlie was a very special person. I’m still amazed at how many lives she touched,” said her father Jason Fernandez. “She was always excited to go to school. That is what got her through the tough days, bring with her friends and her dogs. This is truly a great community. They all supported her and even now with this award. It is truly an honor.”

Stacey Wranesh, the principal of Saddlwood Elementary School, said the 7-year-old was an inspiration to everyone and recalled how much she loved going to school.

“Her class cared and they looked after her and she looked after them as well,” she said. “She taught us the importance of cherishing our time together and appreciate the things that make us happy. Charlie was happiest playing and sharing her time with her friends and family, riding the school bus back and forth to Saddlewood and spending any minute she could with her classroom and her classmates and her classroom teachers. Charlie has touched so many lives. Each act of kindness creates a ripple effect and Charlie’s kindness will continue on and on.”

The SUV is wrapped in Colonie Raider colors Garnet and Gold and to say it stands out in the crowd is an understatement and by design.

“When (School Resource) Officer (Patrick) Germine drives this car in the community it is going to be recognizable. There is going to be nothing else like it,” DeFazio said. “If you can imagine, when a student who is in a traumatic situation, who is in crisis, who is having some trouble and this car pulls up he or she is going to feel that much more comfortable. They are going to know this car is part of the community. They are going to know it is someone who is safe, it is someone who can help them.”

The graphics program for years has designed a billboard focusing on a public service or an ongoing issue in the community. For example, in 2019, it highlighted the dangers of vaping. This year, though, was different because of COVID and the class was forced to alter that plan. Still, it included the same amount of thought and care and is still a community benefit.

“There is movement to the car when it’s not even moving so we thought that would be cool,” Rhode said. “And it was fun designing it as well.”

iCARE is the brainchild of Thomas Kachadurian, who is now the executive principal at Colonie High. Eleven years ago, he said, he was an administrative intern looking to “ignite change, connect our community and eager to clearly define our collective culture, what it means to be a Raider.”

The faculty came up with five essential core values, down from an initial 500 that were tossed on the table during brainstorming sessions.

“I can remember them in the order they were ranked. Community first, then respect, then empathy, then integrity and accountability but if you rearrange them carefully that is the iCARE origin,” he said.

He and a student named Jason met in 2011 and that group of two has grown to scores of students who embrace those five simple tenets of living.

“We tried to create our missions purpose: to create a space where every student has a sense of belonging in this school. To become a voice for those unheard and to make sure every student understood who they are at that very moment in their lives is exactly who they were supposed to be,” he said. “From that we carved out a clear definition of what it means to be a Raider. A Raider leads in the face of fear and adversity. A Raider lifts others up when they cannot carry their own burdens. A Raider empowers so those forgotten may be remembered. A Raider advocates when others struggle to find words. A Raider acts with positivity, pride and dignity especially when times are most difficult. And a Raider unites others through hope.

“Our Colonie students are brilliant, they are talented, they are beautiful, they are empathetic, they are inspiration and there are countless other words. But what makes me most proud of them is they are simply good people.”

Coogan, the iCARE co-president, has been a member for all four years of her high school career and said she will carry the lessons learned for the rest of her life.

“If everyone was just a little kinder to one another, if everyone or checked in on someone or did something to make someone’s day we can easily change the world. It is something so impactful and so powerful and I will always carry this with me as I have for the last four years. I hope all of you will do the same. To remember doing something simple can change someone’s life, no matter how small the act.”