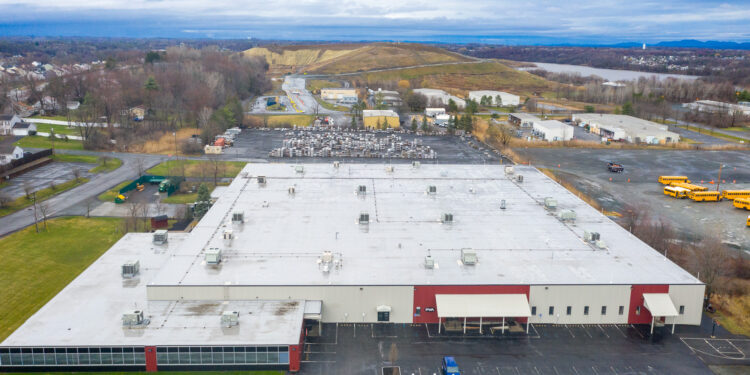 A view of the PVA facility with the landfill to the north at the top of the photo. (Jim Franco/Spotlight News)

COLONIE — The Planning Board heard for the first time last week an idea to convert a vacant, 17-acre industrial complex on Route 9 into a final-mile distribution hub for retail giant Amazon.

The plan, introduced by Tom Palumbo, of Santec Consulting Services, and Michael Keleher, the Amazon senior project manager of the Northeast, would combine three parcels on Mustang Drive and Green Mountain Drive and Fonda Road. The largest structure on the site was occupied by Precision Valve Automation.

The facility would not be a regional distribution center like the one recently built in Rensselaer County, but would have trucks deliver goods during the night and the packages are then loaded up on vans and delivered to customer’s homes during the day.

Keleher said the vans typically do not leave the site until after the peak morning rush hour and do not return until after the evening peak travel times. He said on average the vans will make about 120 trips out of the building per day.

“Once vans are out, the site is pretty quiet,” he said.

The facility is expected to have between 50 and 60 fulltime employees and that does not include the third-party contractors, or delivery people.

Delivery vans will enter the canopied area from the east and exit the site to the west using a driveway on Mustang Drive to Fonda Road to Route 9.

Planning Board Chairman Peter Stuto said he wanted to see “something green” incorporated into the project and Planning Board member Frederick Ashworth suggested solar canopies on the parking lots since the roof of the existing building may not be able to support traditional solar panels.

The plan will have to come back before the board at least twice more — for concept acceptance and final site plan review — before construction can start.

Amazon had explored the possibility of establishing a final-mile distribution facility off Central Avenue in the Village of Colonie but those plans fell through.