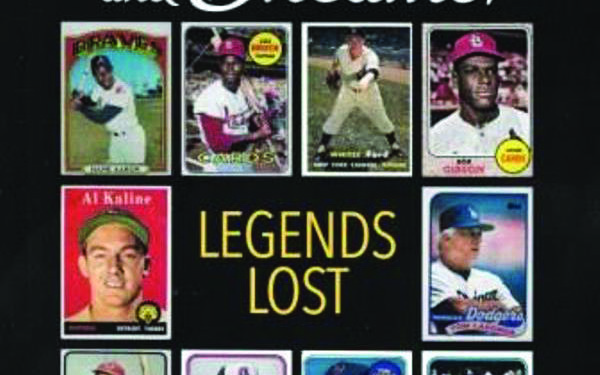 It’s been a long haul of days never going above 32 degrees, too little sunshine and pandemic news 24 hours a day on eight news channels. Since last April, our lives have been not only a road less traveled but a road never built. Books, music, hobbies, puzzles and other seldom-used or seen items occupied our time. When the virus hit last April, the spring cleaning, garage sales and fresh air went into hibernation.

The spring cleaning work for 2020 disappeared, but there is the hope for a renewal. It returned to me from my friend Bill, who cleaned out a camp and found many baseball cards and old stamps. This alerted me to my many baseball cards in boxes and binders. All winter I have taken on a cleanup venture on my third-floor cave.  Years ago, I was into collectibles and some antiques. As I write this article in the cave, I see the many old radios (not working) that make a nice appearance and some say “the good old days.”  I have a 1929 radio that gets two channels, and I wonder if people listened when the stock market crashed or Babe Ruth was playing. I was called a utilitarian once by a school superintendent, and so my collections grow and are cherished.

As I look around the cave, there is much of my WW II memorabilia in terms of books, articles and old magazines. With the heartfelt belief that books should be donated or sold, I never throw out books. Maybe it is a WWII thing as I recall Germany did it over 85 years ago. My Time Life book collection about WWII has me reflecting on the time I explained to my son in the 1970s that I bought these books because there will not be another World War.  As Einstein said, “I know not with what weapons World War III will be fought; but World War IV will be fought with sticks and stones.” Next to that book collection is one entitled “The Old West.” Good reading, good pictures, and now I see them on the All Heroes channel on Cable TV.

I find old record albums and turntables I gave to my children in the 1970s.  Now I see my current inexpensive turntable that plays albums I bought in the late 50s through the 1980s. There are more than a few sentimental feelings when I see some of the artist who have left us. On March 8, I received my quarterly Baseball Hall of Fame magazine entitled “Memories and Dreams.” The cover displays baseball cards of Hall of Famers and the theme is “Legends Lost.”  The cards of those who left us in 2020 are Aaron, Brock, Ford, Gibson, Kaline, Lasorda, Morgan, Niekro, Seaver and Sutton.

I found replicate posters to commemorate big events. The heavyweight boxing fight between Ali and Joe Frazier, entitled Super Fight II. The date was Jan. 28, 1974 – no radio or TV, only on big screen closed circuit at $10 a seat.  My 18-year-old grandson old found this very interesting and intriguing. Also there was another 14-by-22-inch poster of the 1955 World Champions Brooklyn Dodgers. Then there is a collection of VHS tapes.  There is the original Jackie Robinson Story that stars Jackie Robinson and Branch Rickie. Who has a VHS player nowadays?

So how do we clean, organize, dispose or reminisce with our things that helped us get through the last 12 months.  Maybe we should focus on how lucky we are to be here.  Roy Campanella, a childhood Dodger idol wrote a book called “It’s Good to Be Alive.” Roy was paralyzed in 1957 in a car accident and never walked again.  We should all have his spirit as we clean, recollect and see brighter days.

The author is a Capital District resident and freelance writer and guest speaker.