Students, coaches and teachers rally for permission to play sports 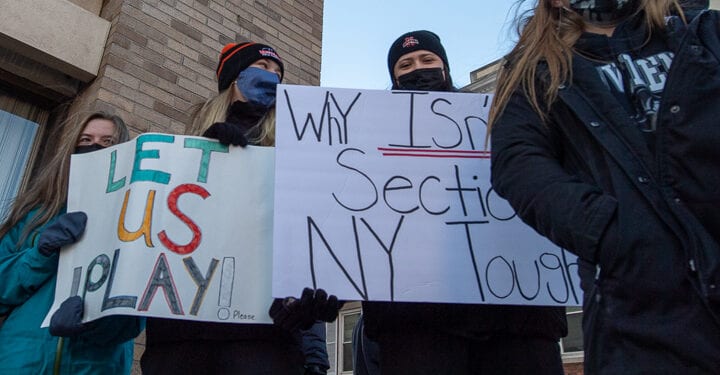 High school students, coaches and parents rallied outside the Albany County office building to try and convince officials to let them play sports.

But County Executive Dan McCoy and Dr. Elizabeth Whalen, head of the county Health Department, are sticking to their guns and will not allow “high risk” sports to begin until the seven-day positivity rate is 4 percent or lower.

“I know parents want kids to play, and they want their kids to have their senior year. I do too,” McCoy said during a press briefing while the rally was happening outside on a frigid cold Saturday, Jan. 30. “As a parent of three kids I want that too. I want kids to feel normal. But we can’t just kick out the science.”

On Jan. 22, Gov. Andrew Cuomo announced high risk winter sports like basketball, wrestling and competitive cheer could begin on Feb. 1, if the individual health departments gave them the green light. The majority of the 12 counties with Section  II schools are not allowing winter sports to begin until the 4 percent threshold is reached. Other counties across the state have given the greenlight and a condensed winter athletic season began on Feb. 1 with competition set to start around Feb. 7.

For Albany County student athletes, it is a bitter pill to swallow.

“We need this time to be recruited. We are feeling cheated,” said Mare Louridas, a Bethlehem High basketball player. “They haven’t seen me play live since last February. It feels unfair. Let us play. We can play safe and we can follow the rules.”

“We want the social interaction and the chance to play the sport we love. Everyone is at a loss right now, with all that time on our hands and playing basketball is important to me and my teammates,” said Macie Crimarchi, a basketball player at Colonie High. “I want to make a difference today. That is why everyone is out here on this cold day to fight for what we believe in and make a different rather than wait for something to happen.”

But Whalen and McCoy said it was not going to happen. They said students athletes could begin training and doing drills but scrimmages and games are off limits until the infection rate gets below 4 percent.

“It is just not time to start opening things up again,” Whalen said. “I feel it is unfortunate they are here on such a cold day. Everyone has a right to state their opinion but parents need to carefully look at the information they are sharing with their children.

“Sometimes we have to work on strategies for the greater good. There are a lot of sacrifices many people are making and this is one of them.”

As of Monday, the seven-day positivity rate in Albany County was 5.5 percent, down from 6.4 percent on Saturday, according to McCoy. In the eight-county Capital District it was 5 percent, according to the state Department of Health COVID-19 dashboard.

There were a handful of parents and coaches at the rally and they not only pointed to the sport, but the ancillary benefits of students participating in athletics.

“I feel there are so many kids that have so much idle time and with idle time is not good for kids. You are going to have kids who never did drugs before doing drugs. You are going to have kids playing sports in places that aren’t supervised by parents and coaches. They are going to go to the schoolyard and play with each other,” said Paul Schafer, a parent with three children participating in sports at Shaker High. “If you give 15 hours a week, that is about what they put into sports, if you give kids 15 hours a week they are not going to be social distancing, they are not going to be wearing masks, you know what they are going to be doing, they are going to be hanging out with their friends doing what nobody wants them doing with the exception of Albany County. They say they [athletes] might get a disease, and the might, but they don’t want to pass it onto older people. Every kid here knows to be careful and not pass it onto older people.”

The state put high risk fall sports like football on hold until March, which is known as Fall II but winter sports, like basketball, hockey, wrestling and competitive cheerleading, was left in limbo until the governor’s announcement. Section II put out a tentative schedule in anticipation of sports starting up again but that was squashed last week by a number of counties in Section II. Other counties and sections across the state are playing sports and high schools in a number of states across the country also began playing winter sports.

Athletes playing “low risk” sports like gymnastics and bowling have been competing but at separate venues or at different times.

According to the National Federation of State High School Associations, 38 states are now playing winter sports with 12 states delaying the start. The federation listed New York as a state that won’t begin until Feb. 7, as so it is in many counties outside of the Capital District and Section II.

A December letter sent to the governor by the New York State Athletic Administrators Association outlined their plan to begin all winter sports and said they could do so in a safe, responsible manner.

“As a professional association, we ask for this with the knowledge that those sports are not only safe to run, but will be overseen by athletic administrators that have worked tirelessly to develop protocols to deal with the COVID-19 virus should there be an isolated case,” according to the letter. “There are many documents authored by groups concerned directly with maintaining a safe environment for students, staff, and the surrounding communities and should be considered as a guide to the opening of a full sports program. We have followed the NFHS, CDC, and DOH guidelines to the letter to begin our limited seasons and now feel confident that after seeing how the rest of the country has celebrated successes, it is time for New York to lead again.

“The bottom line is that high school and middle school sporting events, controlled by Athletic Administrators are safe and well below the 1 percent that we saw throughout this unprecedented time.”

According to McCoy, athletes can “prepare” for the season’s start by training and doing drills but there is no interaction allowed such as inter-squad scrimmages or, obviously, games.

Cuomo is opening up things across the state, restaurants in “yellow zones” are being allowed to serve again and weddings can now have up to 150 guests or no more than 50 percent of the venue’s capacity. And at the same time he left it to the counties to make the final call on sports.

“It was unfair to our health commissioners, it was unfair to us the governor to release this on us unannounced without any guidance without talking to us and said ‘here you figure it out’ in the midst of everything else going on,” McCoy said. “I don’t know why things are changing, we are saying ‘open up and do weddings, do this and that’ when the numbers are at our peak and we lost more Albany County residents in the last two months than we have over the past year.”