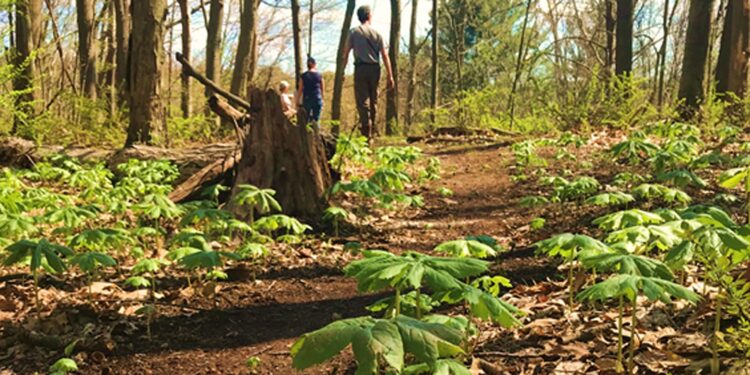 ELSMERE — Bethlehem Supervisor David VanLuven announced last week that the town closed on the purchase of approximately 69 acres from Normanside Country Club, extending the footprint of a new community park.

The purchase concludes a two-year effort to build a 147-acre Normans Kill Ravines nature park. The footprint extends to the east near Salisbury Road and spans west to an entrance on Wright Lane. It’s northern border protects more than 3,000 feet of Normans Kill shoreline, lending its name to the new park.

“I can’t describe how exciting it is to see this idea, which started when Karen [Shaw] and I were looking at a map of Town-owned lands back in early 2018 and I said, ‘We could make an amazing park there,’” said VanLuven. “And now we have an amazing park.”

The land acquisition costs the town $146,900. Included into the price tag is a $11,900 land survey and a $1,000 option-to-buy previously held by Mohawk Hudson Land Conservancy. The purchase is covered through funds already earmarked under the town’s Town Parkland Set Aside Fund.

The Parkland Set Aside Fund is one of two, prominent tools the town has utilized in its pursuit to preserve open space. Since 2016, the town has protected 93 acres under its Conservation Easement Exemption program. The program took off in earnest after Bethlehem Central School District agreed to offer tax-break incentives. More than 40 acres were committed under an agreement settled last December off of Blessing Road.

Within that same time frame, another 90 acres have been acquired as parkland. The town had already owned the 85 acres of land of Wright Lane since 2014. Nonetheless, assuming the total acreage of Bethlehem’s newest town park, 175 acres have been preserved.

“Whenever we have good news to share, we’re giddy,” said Karen Shaw, the town’s open space coordinator. The acquired land is expected to extend a network of trails already present at Wright Lane. Volunteers and professionals are working on the trails to create an environment suitable for hikers and mountain bikers through forest landscapes, ravines, wetlands and riverside views.

The park creates an expansive greenspace preserved less than a mile from Delmar’s Four Corners. Its proximity to the Albany County Helderberg-Hudson Rail Trail will lend diverse environments for bikers using the pathway.

The Normanside Country Club has long allowed neighbors to use its former land for hiking and hunting. The country club allowed the latter through a 10-year lease permitting Salisbury Road Deer Management Group, a four-member club, to bow hunt deer on the land.

Last December, the town amended code to allow bow hunting on the Normanside property in order to honor the lease signed in 2019. Hunting will still be prohibited in all other town parklands, including the Wright Lane property.

John Boyd Thacher State Park and the Holt Preserve in New Scotland are among several state parks, nature conservancies and preserves that allow for bow hunting. Mohawk Hudson Land Conservancy said it has managed hunting on three of its preserves for decades.

“There’s a lot of losses when you’re dealing with protecting land, but when there’s a win, it’s exciting,” said Shaw. “I think we live in a very interesting community for this to be happening.”

Students, coaches and teachers rally for permission to play sports