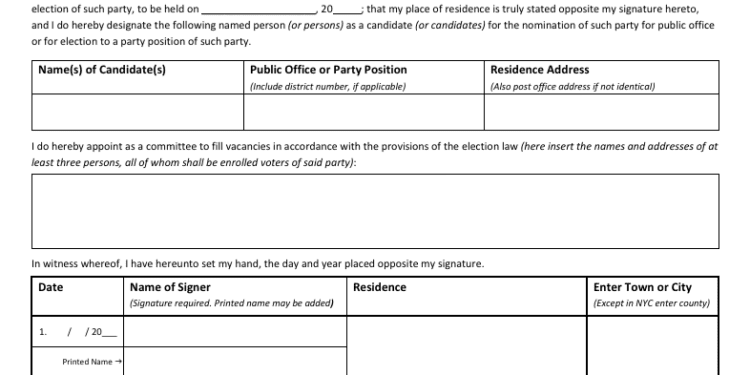 ALBANY — While November is still 11 months away, designating petitions for political candidates are set to hit the streets in late February. And as with everything we do, COVID could change the way politicos complete that arduous task.

According to the bill, sponsored by Assemblyman Robert Carroll, a Democrat from Brooklyn, the state and county boards of elections are “directed to provide a system for qualified voters to sign a designating petition for a candidate by way of a secure internet portal” rather than in person.

For a candidate to get on the ballot, he or she must garner a predetermined number of signatures by active, enrolled voters in that party. The number changes by jurisdiction — and was changed last year due to COVID — but it is roughly 3 percent of the enrolled number of voters, excluding those enrolled who are not active. The signatures must be witnessed by another party member in good standing, a notary public or commissioner of deeds.

It is a time-consuming, laborious task every year and there have been a number of instances where viable candidates were bounced off the ballot for not getting enough signatures or for not following protocols.

It often entails going door-to-door, talking face-to-face and swapping paperwork with strangers. All taboo in the COVID world as we know it right now.

For the online portal bill to pass, it would take the state Senate to pass the same version as the state Assembly and would require the governor’s signature to become law. Or, the governor could enact an executive order.

The bill in the Assembly would include a “method to for the qualified voter’s identity to be properly verified.” It would not “preclude the collection and use of paper designating petitions.”

Rachel Bledi, the Republican Albany County Board of Elections commissioner, said she had not seen the bill before Monday and said there is “great risk in being forced to develop these types of systems in a short time frame” like the issues with the absentee ballot portal.

“The epidemic presents challenges in performing basic tasks, such as door to door activity, necessary to gain ballot access,” she said. “However, it remains to be seen if the technology can support the concept of an online portal while ensuring voter identification verification. This will open the door for many legal challenges.”

She said the governor has not yet issued any executive order about this political season in regards to signature requirements or even a political calendar.

“Everything remains in limbo,” she said.

ON THE BOOKSHELF: New books for a new year (children)

SPOTTED: The Dog Days of winter at the dog parks