No Result
View All Result
Home Opinion Our Opinion 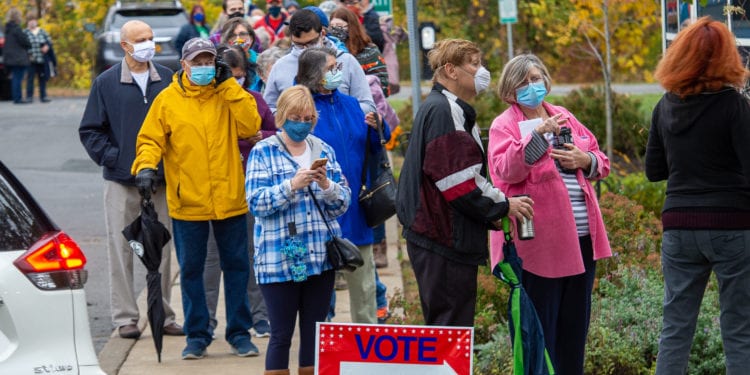 That was fantastic. I photographed four different polling spots on Saturday, the first day of early voting, and at each one found long lines of people waiting to make their voices heard.

Never, in more than 20 years of covering elections, have I seen anything like it. And Election Day isn’t even until Nov. 3.

Say what you want about President Donald Trump — as if anyone needed encouragement to do that — he did fire up the electorate like no politician in our lifetimes.

My first job of the day was at Niskayuna Town Hall. On the way over, I thought two things: This job is going to be lame. But at least it won’t take long to get something from a half dozen or so people carrying “I hate Trump” signs.

When I pulled into the parking lot, I got chills. The line was along the front of Town Hall, down the side of the building past the police station, up the far side of the parking lot and it was looping back around the top side of the lot with a steady stream of people pulling in.

An amazing site to see.

In New York, less than half of the eligible voters generally show up and on off years it hovers down around 30 percent. Turnout is generally so abysmal, I once wrote a column urging this country to follow Australia’s lead and make voting compulsory. If you are eligible, and you don’t vote, you get fined $100 or some amount carrying some amount of significance. I appreciate the Constitutional right of not voting, but a simple “none of the above” lever would satisfy that freedom of choice or expression or whatever freedom not choosing to vote falls under.

It is going to be interesting to see what the final numbers are not just here but across the country. Barring some inexplicable fluke of natural or mathematical law at the hands of thousands of closet Trump voters, New York is all but a shoe-in for former Vice President Joe Biden. The last time a Republican presidential candidate won this state was in 1984, when Ronald Reagan beat Walter Mondale for a second term, and the last Siena poll had Biden winning by a 2 to 1 margin, 61-29.

And still New Yorkers are flocking to the polls. Yes, there are down-ballot races, but none that are really driving people to the polls in the numbers I saw on Saturday.

I don’t think voters are fired up about Biden either. A 47-year career politician with a lackluster record who doesn’t even seem like he wants to be president. At least Bernie Sanders had a base, a following. An ideology and plans to implement his ideas. I’m not sure what Biden brings to the table outside of the fact he isn’t Trump.

After nearly four years, there are not a lot of people sitting on the fence and the rhetoric for and against the Republican has escalated as the country’s collective stress level inches up with a global pandemic making a second wave, civil and racial discord and an uncertain economy.

Trump doesn’t help himself either. Policy aside, the guy is pretty much a loud mouth jerk with all the escalated sense of entitlement that comes with a silver spoon in his mouth — but since his mouth, and Twitter account, never stops moving we will probably have to say silver spoon in his hand.

That said, pre-pandemic the country wasn’t doing too bad and if he had Reagan’s personality he would coast to a second term. Safe to say he is not Reagan. He is Trump. And because of that, the country has not been this divided in years, probably not since the Civil War.

When things are going good, people are more focused on other things and don’t vote. When people are fired up, they vote. Love him or hate him, Trump has a way firing people up and if there is anything universally good about a man as divisive as No. 45, it was the long lines I photographed on Saturday.