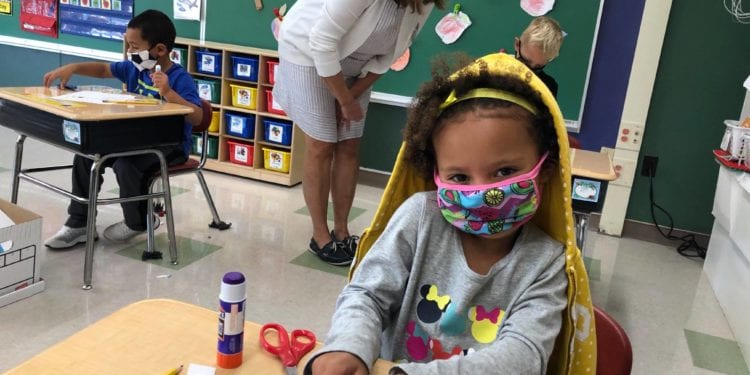 Masks and social distancing are both the norm as school started up its first week of classes. Bethlehem Central School District

DELMAR — Jody Monroe can often find herself wearing different hats as Bethlehem Central Superintendent. In the first week of school, she found herself holding a sign directing Slingerlands Elementary students to their buses.

“It was really great to see the kids coming into the buildings,” Monroe said. “I was over in Eagle [Elementary] one morning, and the kids were getting off the bus with their new backpacks and lunch packs, and everything seems to be going well. I was over at Slingerlands [Elementary] for dismissal. Arrival and dismissal have been quite the undertaking because of our parking lots and not blocking roads, [but] everything went very smoothly.”

Bethlehem Central students and administrators stepped off on the right foot to start the 2020-21 year. It was the start of a different academic year defined by facemasks and a hybrid schedule that splits the student body between those in class and those learning from home.

The New York state Department of Health has halved bus capacities, but that alone is not the only factor in deciding who and how many children are assigned a route. The larger school buses boast a normal seating capacity of 66, with three children in each of a total of 22 bench seats. The confines of a school bus does not allow six feet for social distancing, so face coverings would be required.

The school district had anticipated logistical problems in June with the combination of an underutilized bus fleet and increased car traffic to its seven schools, including five elementary schools.

“And, I’ve heard nothing but positives from the schools,” Monroe said. “The teachers are getting used to the hybrid model, with some of the kids at home and some on site. It’s been just really great to have the kids back in the halls and having some activity in our buildings.”

School Board President Holly Dellenbaugh had asked how parents could provide feedback to teachers facilitating remote learning. She said community members shared concern with teachers’ pace as they pushed too quickly through lessons.

“Knowing that not all classrooms are the same, I would suggest they reach directly out to the teacher,” said Assistant Superintendent Dave Hurst. “Every class is going to be different.”

Students and parents juggle with zoom classrooms and additional online tools, but there is an apparent improvement from last school year. Dellenbaugh said she felt the technology has worked well and congratulated Raymond Nardelli and the district’s technology department.

“Knock on something,” Dellenbaugh said, concerned with jinxing the school’s good fortune.

“Watch it crash,” Monroe said with a laugh.

Willow Baer briefly stepped out of her role as a board member to express her “overwhelming” gratitude to administrators as a parent.

“I literally wept as I dropped my kids off to school,” she said, “because of how safe I felt doing that, and how important that is. ”

Monroe continued to share that buses have run on schedule and traffic at the schools have been managed well.

She said principals at the middle and senior high schools have developed ways to usher students safely who have been dropped off at the schools too early.

“Other than little things that pop up,” Monroe said, “it’s been relatively smooth.”