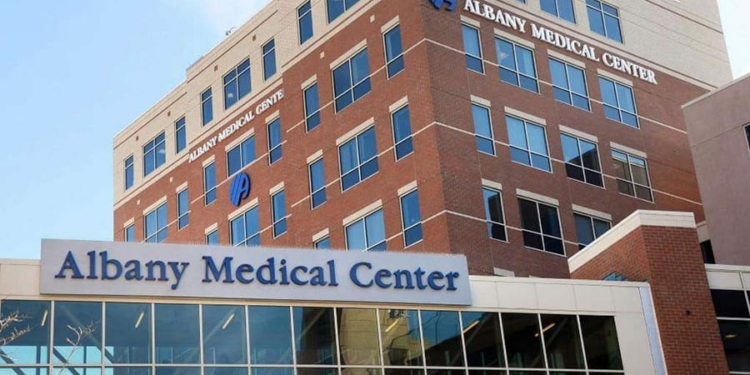 ALBANY — There are just five people being treated for COVID-19 at Albany Medical Center Hospital, the lowest number in more than six months.

“In the beginning of this they talked about ‘let’s flatten the curve’ and if you could look at the cases at Albany Medical Center you would see it go up in April and start coming down in May and you would see it steadily going down over the last couple months and you would see us now at a number we haven’t seen since March,” said Dr. Dennis McKenna, the president and CEO of Albany Medical Center, on Talk 1300 radio. “We go many days without having any admissions. I am not predicting we will go down to zero, but it wouldn’t surprise me.”

Albany Med, the Capital District’s largest hospital, had as many as 80 COVID-19 patients in April, including a number of transfers from the hardest hit area of New York City.

McKenna would not speculate on the possibility, or severity, of a second wave later this fall into the winter but did say every year there is influenza and annual preparations at the hospital are taking into consideration COVID-19.

“We have a group of people every year that work on what we call the ‘Influenza Plan’ including how we handle a surge of influenza patients, which is often the case where we have more patients to care for than the space to care for them,” he said. “This year it is more complicated because we have to sort out who has influenza and who has COVID.”

He said the plan includes a tent outside the hospital to test for COVID-19, the ability for rapid testing with results in under four hours and a plan to isolate those who do test positive for COVID.

“I can’t predict the future but whatever happens we will be prepared,” he told Talk1300 talk show host Paul Vandenburgh. “I remember, in the past, with influenza, as a society we dealt with it. We certainly found a way to educate our children in person every day. We found a way for businesses to remain open. We found a way for people to go out and enjoy activities outside of work. I think collectively we should work towards getting back to that again in a safe way and I am confident we can do it.”

He said he is concerned about the spike in cases at colleges across the nation and sympathizes with parents concerned with sending younger children back to school.

“I am concerned not from the standpoint these students are going to get sick. By and large, we are talking about young, who are otherwise healthy, asymptomatic individuals. We are not seeing an increase in hospitals,” he said. “What we do know, though, is the students often become the source of spreading it to other people. Obviously I hope the schools do what they possibly can to keep those numbers down. We want our students to be educated and I think we can all agree the best form of education is in person so I think we should do whatever we can do to keep the numbers down to keep the schools open.”

SUNY Oneonta was one of the hardest hit campuses with more than 800 students who tested positive. But, not one was hospitalized, according to reports.

In Albany County, there were 11 new cases with seven tied to UAlbany. Of the 117 active cases of COVID in the county, 80 are UAlbany students. All 11 new cases had close contact with other positive cases.

The total number of cases to date, as of Wednesday, Sept. 16, stands at 2,725 with 571 under mandatory quarantine. There have been 2,608 people who tested positive and recovered.

There are seven county residents hospitalized for a rate of .25, down from .36 on Tuesday. There are no residents in the ICU and the death toll stands at 134 since the outbreak began in mid-March.

“While this isn’t necessarily a trend yet, I’m happy to see some of the county’s data improving in the last two days,” said County Executive Dan McCoy. “Our daily average is going down and we’re no longer seeing new daily positives in the 20’s like we saw over the weekend. That, along with the number of residents currently hospitalized due to the virus dropping down to seven from a recent high of 15 just over a week ago, leaves room for some optimism.”

LETTER to the EDITOR: Thanks for supporting ‘Invest’ campaign

LETTER to the EDITOR: Please wear your masks