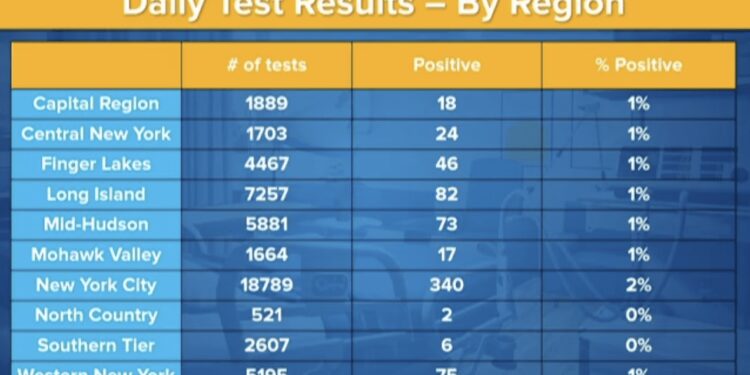 ALBANY — The state released a new COVID-19 dashboard to track the virus’s spread on a daily basis across specific geographic boundaries.

The dashboard — which was supposed to resemble a 1968 GTO, according to Gov. Andrew Cuomo, but the design team fell short — will tell by region and county how many people were tested and how many people tested positive.

The tracing program will then reach out to those who tested positive to determine where they were and who they came into contact with.

“With this dashboard, you can see tremors of a spike and if those numbers start to move you know when and how,” Cuomo said.

On Monday, in the eight-county Capital District — Albany, Rensselaer, Saratoga, Schenectady, Washington, Warren, Greene and Columbia counties — there were 1,889 tests administered and 18 positive cases for a 1 percent infection rate.

Cuomo said there is not set number or infection rate percentage that would lead to the state rolling back some aspects of society that are now open, or slated to open, but rather what the numbers mean.

For example, he said, contact tracing could lead to the conclusion five or more of the 18 cases in the Capital District came from the same place of employment. That is not a spike, he said, but rather a hotspot that needs to be isolated. A danger zone, he said, is when “you cannot find a specific cause for that increase and you see it continue over time.”

“If there are increases you cannot explain or resolve then you have an issue,” he said.

The new dashboard can be found on the state Department of Health website.